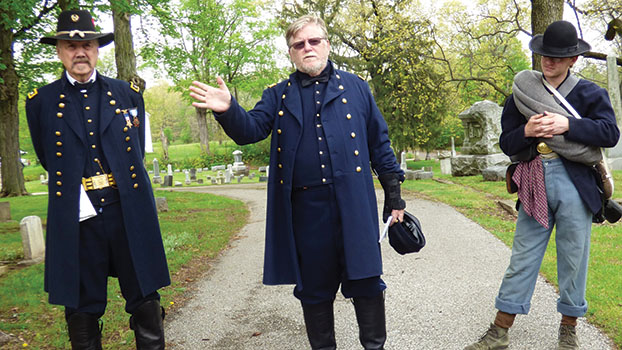 BUCHANAN – It was a much different life 155 years ago in 19th Century Buchanan. People were settling the area and starting farms and businesses. They were also sending their fathers, sons and brothers off to fight in the Civil War.

Area residents had the chance to learn more about those who fought and served at the Civil War Cemetery Walk last weekend at Oak Ridge Cemetery on the city’s west side. Organizers Bob Brown and John Urschel actually conducted the walk twice, on both Saturday and Sunday as some people came Saturday although it had been officially postponed.

Brown is the president of the Friends of Oak Ridge Cemetery while Urschel is a Civil War historian and author. The walk was sponsored by the Friends as well as the city of Buchanan, Civil War Roundtable of Southwest Michigan, the Buchanan Preservation Society and the American Legion Post 51.

The nearly two-hour walk took people to at least 40 graves around the older part of the cemetery. It’s estimated that around 150 Civil War veterans are buried in Oak Ridge. The war is also remembered in the cemetery with two monuments, the Parrot Rifle cannon and the Civil War statue.

The cemetery itself dates back to 1864 when 10 acres of land was purchased off of West Front. The cemetery has since expanded and now runs all the way to Terre Coupe to the south and east.

Among those highlighted on the walk were those from longtime families such as the Millers, the Batchelors, the Carlisles, the Callahans, the Days, the Wolcotts, the Tottens and the Perrotts. One of those was Benjamin Binns, who was born in England and married into the Day family. He was wounded at the battle of Shiloh.

In addition, people learned about two African Americans, L.Q. Hays and Cyrus King, who served in the Civil War.

“They didn’t serve until 1864 because weren’t allowed to do so until then,” Urschel said.

Buchanan resident Kathy Swem was also on hand to portray Hannah Carlisle and talk about three of her stepsons who served in the Civil War. Carlisle herself served, working as a nurse in Kentucky for much of the war.

Hannah Carlisle was born in New York in 1823 and moved to the area when her sister married Daniel Carlisle. When her sister died, Hannah married him and helped him raise their children. She also had children with him and lived until 1906 when she died in Iowa at the home of her youngest daughter, Arabella.

“Patriotism ran deep in the community,” Swem told walk attendees. “People served to end slavery and restore the country. People did their part to serve the men who went to war and raised money for supplies. We supported the war in our family with three sons enlisting. I also wanted to do my part and I enlisted as an Army nurse.”

Ted and Faye Chamberlain of St. Joseph attended the walk in historical costumes, telling people about life back then as well as relating the history of one of his ancestors, Major General Joshua Lawrence Chamberlain who fought at Gettysburg and other battles.

Ted Chamberlain spoke a bit about his famous ancestor as well as his research into the origins of the Chamberlain family in the United States. He said the Chamberlains in the Buchanan area are related back to that original family as he is.

DOWAGIAC — Surrounded by blue lights and smoke, Alabama native Kate Falcon detangled herself from an acoustic guitar around her... read more