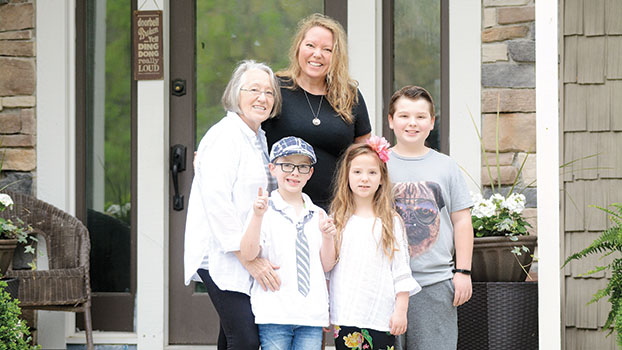 Woman battles cancer treatment side effects while caring for children

DOWAGIAC — Let’s face it, mothers deserve to be recognized every day for the hard work, dedication and sacrifice they put into raising their families. Usually though, moms do not get the thank you they deserve.

As people across the U.S. celebrate Mother’s Day this Sunday, one local mom stands out among the crowd, offering an inspiring perspective on what it takes to care for a family with or without life’s challenges.

For Tanya Kimmey, a lifelong Dowagiac resident, “normal” is only a setting on the washing machine. Since her diagnosis with a rare blood-based cancer in 2002, Kimmey said her life has been anything but. While life has thrown some unique health battles her way, Kimmey said she is grateful that it has not kept her from spending time with her three children: John Carlo, 10, and twins Cash and Lula, 6.

The children are homeschooled by Kimmey, an establishment she likes to refer to as, “Cape Kimmey Academy.” When they are not in school, her children visit Brandywine Innovation Academy in Niles, where they take part in the robotics teams.

In 2002, Kimmey and her husband Christopher had just returned from their honeymoon aboard an Alaskan cruise. After teaching a yoga class one day, Kimmey felt a pain in her side that she thought was just a pulled muscle. But Kimmey’s mom Katherine Wenger, a nurse, convinced Kimmey to get the pain checked out.

When doctors told her she had a watermelon sized tumor in her chest cavity, Kimmey, who said she has no history of cancer in her family, was completely taken aback. Her diagnosis was a rare blood-based cancer called nodular sclerosing Hodgkin lymphoma.

“In the waiting room, I always won the fruit contest. I would hear ‘[my tumor] is the size of a peach’ and I’m like ‘watermelon,’” Kimmey said. “It was stage three when we found it, so I was treated immediately.”

Chemotherapy and radiation treatments helped to cure Kimmey’s cancer by 2003, but the battle was not over yet.

“I remember [being told] I would have a lifelong journey with healthcare,” Kimmey said. “Even soon after chemotherapy and radiation, there were side effects I was experiencing.”

First of all, Kimmey said she feared the treatments would impact her ability to have the children that she and Christopher wanted. She still said she “feels blessed” that she was able to have her three children.

Before becoming a stay-at-home-mom, Kimmey and her mom, Katherine, ran the Pacific Quest Day Spa for 10 years. But after battling cancer and later giving birth to her first son, John Carlo, Kimmey knew her health issues would limit what she could do at work. She decided she wanted to spend time with her family in case this too was limited by illness.

“You hate to look at things so finite, but I think there is a perspective that comes out of any diagnosis,” Kimmey said. “When you are put up against that, you try to really hone in on the things that give you joy and how you cannot only fill yourself up but give it back.”

Kimmey said she first began noticing health issues stemming from the cancer treatments about eight years ago. Radiation had damaged a large portion of the tissue where she was treated and resulted in some other problems with her esophagus and thyroid. She also suffered from skin cancer as a side effect.

Now, Kimmey said she and her family are looking at various treatment options and an operation is likely in the future, she said.

The situation has been one Kimmey has had to try and explain to her children, though she said it is hard for her children to ever see their mom as sick.

“For the longest time, mommy did not have anything wrong,” Kimmey said. “She is the healer of all things. She is the bug killer, she is the one that is going to scare the monsters under the bed. She is the hero here.”

While she said she has been tempted to reassure her children that nothing is wrong, Kimmey said she also wanted to be honest with them about what she was going through.

Regardless of how tough things get, Kimmey said her family’s bond has been something that she and her children can rely on to carry them through.

This Mother’s Day, Kimmey and her family will celebrate the holiday with a traditional family ice cream social.

She said she seeks to remind her children of just how important moms are by showing gratitude toward her mom.

“I celebrate my mother beyond belief. I am so grateful to have her in my life,” Kimmey said.

Kimmey encouraged others to also take the time out of their day Sunday, or every day to celebrate their moms.

“Why not thank them?” Kimmey said. “Thank them for everything they have done and everything you can do because of them. Gratitude is a circle. … Giving that gratitude to the women who have helped us, held our hand and cheered us on [matters].”

NILES — Around Niles, Sir Winston Bailey Brown, the golden retriever, is known for his service as a therapy dog... read more