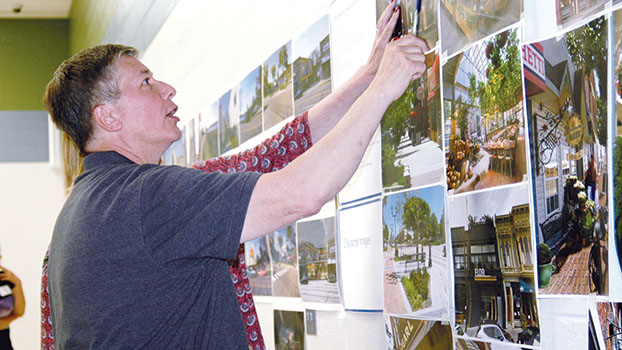 Cass County residents offer input on what they would like to see in downtown Cassopolis at an Imagine Cass event. For the event, MSU-Extension used CGI images to help residents imagine what the downtown could look like. (Leader photos/SARAH CULTON)

CASSOPOLIS — Wednesday evening, the walls of Sam Adams Elementary School were covered in bright, colorful, computer-generated images, depicting what the downtown corridor of Cassopolis could look like.

As Cass County residents walked around the elementary school’s cafeteria, they offered input on yellow sticky-notes about what they would like to see within the village. A coffee shop here. A brewery there. A green space down the road.

While Cass County residents have been wanting to bring the ideas to Cassopolis for years, their fantasies may finally come true, thanks to a partnership with Michigan State University Extension.

Wednesday evening marked second Imagine Cass event to take place, where Cass County officials invited the public to offer input into a revitalization project with MSU-Extension of the downtown corridor of Cassopolis.

Imagine Cass is the result of a partnership between three local entities — the county, the EDC and Cassopolis village government — with MSU’s School of Planning, Design and Construction, through the university’s Sustainable Built Environment Initiative. The program, which the university formed in 2013, is designed to help Michigan municipalities address physical planning, design and land use concerns. The SBEI program has worked with several communities in Michigan, including Allegan, Marquette and Cadillac.

The second Imagine Cass event served as a follow up to an event that took place in late January, where individuals filled out forms and offered input on what directions they would like to see the project take. Officials from MSU-Extension then took those ideas and put them into CGI images that were first presented to the public Wednesday.

The images included visions of projects both big and small, ranging from burying power lines, to redoing sidewalks to utilizing alley space to even adding a large hamburger and ice cream cone to the top of The Twirl.

“This is all about what you can imagine,” said Warren Rauhe, a representative with MSU-Extension. “We want to see this community come to life.”

“You already have a functioning downtown and a great space,” he said. “That’s more than most communities.”

For Cass County Administrator Karen Folks, Wednesday also marked the first time she had seen the images, saying that she was more than happy with them.

“They are absolutely phenomenal,” she said. “I so love how they have broken down these ideas.”

After seeing the images, Folks said that it is easier for her to envision how the Imagine Cass project will come together and be implemented.

“Some of the ideas are so accessible,” she said. “We don’t need a $100,000 grant for all of these ideas. Some of them are as simple as adding some landscaping or a painting or redoing the sidewalks. If we do a couple of small things, we can have a fairly big impact. That’s very exciting.”

Folks said she believed the event to be a success with just shy of 200 attendants. She added that she hoped the community would remain engaged with the Imagine Cass Project as it moves forward.

“This isn’t the end,” Folks said. “Stay invested. Stay involved. We want to find ways to start delivering on these projects.”