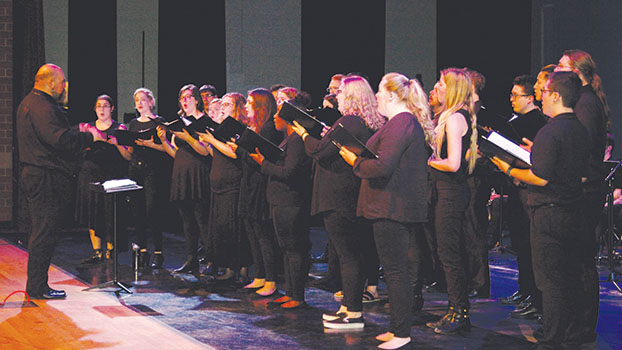 As the children quieted down and took their seats, a dancing blue light came over the stage and a group of Southwestern Michigan College students, dressed in black, took the stage.

Soon after, SMC Select Voices Choir Director David Carew raised his hands, and with them, the choir raised their voices to fill the auditorium with harmonies.

As part of the 2018 Dogwood Fine Arts Festival, festival organizers arranged a program called Klassics for Kids, which took place at 1 p.m. Thursday at the Dowagiac Middle School Performing Arts Center. Representatives from SMC’s music department put on a performance for Dowagiac area students, including performances from the SMC Jazz Ensemble, directed by Jonathan Korzun, and the SMC Select Voices Choir, directed by Carew.

Dogwood Fine Arts Festival Chair Jim Benedix said that Klassics for Kids is an important part of the Dogwood Festival, because it gets area students involved with the festival and the arts in general.

“The arts aren’t often on the top list of our priorities, so whenever we can expose the children to the arts, be it music, culinary, storytelling or anything else, it’s a bit more enrichment, I like to think,” he said. “We want to give them a variety of the arts to experience.”

Choir Director Carew would agree that getting students involved with music at a young age is important.

“We want to expose kids to a new type of music,” Carew said. “Typically, [The SMC Select Voices Choir] selection spans 1,000 years of music. We didn’t do that today, because we had a shortened set, but we tried to show the kids a variety of music.”

Both Carew and Jazz Director Korzun encouraged the students to have fun with Thursday’s performance, with Korzun telling the students to clap along with the music and Carew ensuring that modern music the students would enjoy, such as a song from the pop group The Pentatonix, was performed.

“We do what we can to keep things fun and keep them engaged,” Carew said. “That is how we are most effective.”

Carew said that he hoped a student out in the audience Thursday would be inspired by what they saw and be encouraged to pursue music as they get older. If a student like that existed, he would advise them to learn an instrument, work hard and to continue to pursue their passions.

“A lot of [the SMC] students that performed are Dowagiac grads. I think that shows the younger kids that they can do something like this too,” he said. “If they want to do this when they are older, I would tell them to stick with it. Stick with their choir and their band classes.”