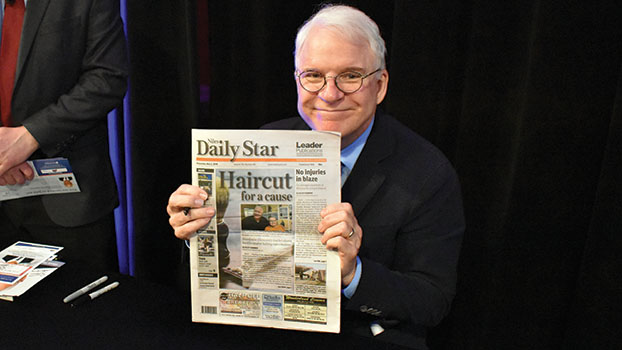 Steve Martin poses with a copy of the Niles Daily Star after the event on Tuesday. (Leader photo/EMILY SOBECKI)

BENTON HARBOR — Under a blazing afternoon sun, then up and coming comedian Steve Martin performed a routine at a run-down drive-in movie theater north of San Francisco in the 1960s.

Audience members tuned in by placing speakers in their car. When they thought something was funny, they showed their appreciation by honking their horns.

Before Martin’s renowned fame as an actor, musician and writer, there were many moments like this one. But each performance, no matter how many laughs he got, helped him to build his success, learn from his mistakes and build a legacy that now includes multiple awards in the music and entertainment industry.

Martin, 72, has starred in films like “Father of the Bride” and “Pink Panther,” and has also been an actor on Saturday Night Live, to name just a few. But Tuesday night, he was the star of the Grand Upton Hall stage at Lake Michigan College, where he hosted a talk called “Born Standing Up.” Martin spoke as a guest for the Economic Club of Southwestern Michigan.

The sold-out show featured a chance to hear Martin speak about his life and the opportunity for the audience to take turns asking him questions.

While some wanted advice about success, others asked questions like: “Will you marry me?” and “Can you be my best friend?”

Martin was joined on stage by commentator Mike Nadolski, who prompted Martin to talk about his success in the entertainment industry and as a writer and musician.

At 18, Martin said he knew he wanted to be in show business, but he was not sure whether that meant pursuing a life as a comedian or actor. But as Martin would discover, he did not have to pick just one median to pursue.

“I cannot see myself as an actor … only an actor who would be now sitting and waiting for a script to come,” Martin said. “… I have had this great life that is accidental. I have had an interest in art in comedy, performing and an interest in music.”

He told the audience about some his earliest days of performing on stage, including working for a club in San Francisco called Coffee and Confusion. When Martin stepped on stage for that first performance, there was not a single person in the audience. The owner told him not to worry, because the club had two windows to the street.

“She said, ‘what happens is people walk by and they see something interesting going on and then they come in,’” Martin said. “I said, ‘Well, I am a comedian.’”

The club was made all the more colorful by a kitchen sign that stated: “Anyone who gives Janis Joplin a drink before her second show is fired.”

While some might say such testaments showed tenacity, Martin said it was otherwise.

“People talk about perseverance … but I didn’t have anything else to do,” Martin said. “It was not so much perseverance as ‘duh.’”

A young comedian from Detroit asked Martin for some advice about how he could turn his craft into a career. Martin’s words could apply to anyone with an aspiring career.

“Unfortunately, the advice I have for you is do everything, no matter how pathetic it is, how inappropriate it is for your act,” Martin said. “And then start to slowly push for elevation of your performance circumstance. … You have got to get them in a situation where they are there to see you.”

Martin also mentioned some of his inspirations for the comedy industry, including Lewis Carroll, the author of “Alice in Wonderland.” He said he found a unique sense of humor in the book that inspired him, alongside comedians such as Jack Benny.

Martin also described an arrogance to his humor, born from over confidence that he said eventually became a signature part to some of his acts.

“I though arrogance is a great way to go on stage, especially if you are terrible,” Martin said.

Martin left the audience with lots of laughs and jokes to share. The performance was further complemented when Martin played his banjo to the audience.

A few shared with Martin how he had touched their lives, including a married couple who said they first met each other at one of his concerts. A woman also shared that she had written a letter asking Martin to prom when she was a teen in 1978. Martin declined the invitation, but responded with a “hilarious” letter that the woman said she treasures to this day.

Looking to the future, Martin is now working on a Netflix special that he said will debut at the end of the month. He is also continuing to tour and seek to inspire others with laughter and some sage advice. Spending time with his wife and 5-year-old daughter is also a priority, Martin said.

Martin’s visit to Michiana also included time set aside to meet with LMC students and he also signed autographs after his show.

At LMC, he reminded those in the audience that sometimes they have to make their own path to achieve their dreams.

Beckwith to premiere murder-mystery May 11

DOWAGIAC — A small corner of Dowagiac has been transformed into a noir film set, as women walk around with... read more