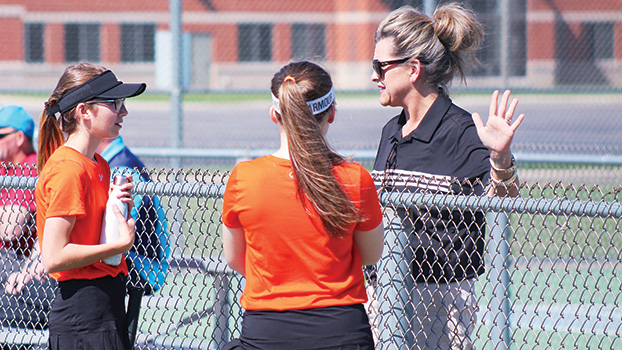 DOWAGIAC — It has been a long season for the youthful Dowagiac tennis team, but that does not mean it has not been a successful one.

The Chieftains are still looking for their first win of the season following a 7-1 loss to Buchanan Tuesday.

The lone Dowagiac win came at No. 4 doubles where Gabbi Munson and Lilly Hiler defeated Tayler Vite and and Madison Newport via a forfeit.

Weather has played a significant factor in the development of the Dowagiac team, which has just one senior in the line up — Ally Hale.

“The worst weather I have had as a coach,” said Dowagiac’s Andi Smallbone. “We have had to practice indoors and had to share time in the Dowagiac Middle School gym. This season has been a challenge for these girls for sure.”

On top of that, Smallbone has a broken hand and wrist, so she has been limited in what she can do to help her squad.

Dowagiac did not even get onto the middle school courts until after it has returned from spring break.

But thanks to the Dowagiac Athletic Boosters, the team was afforded some practice time at the South Shore Racquet Club in St. Joseph.

“The girls got the feel of playing in favorable conditions,” Smallbone said.

There have been several positives as the season has progressed for Dowagiac.

Hale moved up from No. 3 to No. 1 singles and has picked up victories in both non-conference and Wolverine Conference foes.

Rebecca Franklin moved from No. 4 singles to No. 2 singles this season and has also found success.

“Two of our newcomers — Raegan Wild at No. 3 singles and Renee Hoekstra at No. 4 singles — also have posted wins this season.

Smallbone is also pleased with the improvement of her doubles squads.

“So proud of our No. 1 doubles

“They have been fighting tirelessly at every match. They were No. 4 doubles last year. The other doubles teams have really improved.”

But there have been challenges there too.

“Having to move some around and switch slights to see where they are compatible has not made it easy on them,” Smallbone said. “They are definitely troopers.”

With the match against Buchanan, the Chieftains wrapped up their regular season.

Dowagiac will travel to Three Rivers for the Wolverine Conference Tournament Saturday before competing in the Division 4 regional at Leeper Park in South Bend May 17.

of Justice Wirick-Garrelts and Maddi Hill,” she said.

NILES — The sun was beating down on the hilltop of Brandywine’s baseball diamond Tuesday afternoon for a BCS doubleheader... read more