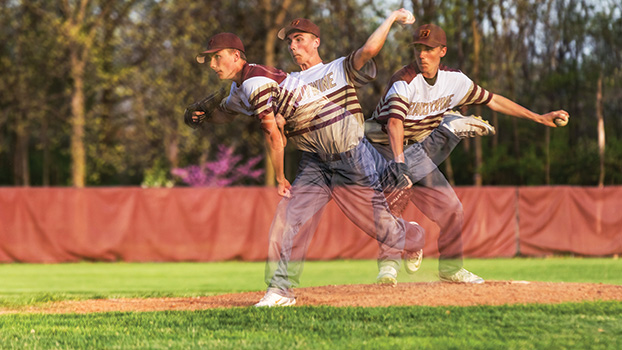 Brandywine’s Brock Prenkert delivers a pitch against Comstock in the nightcap of the BCS doubleheader Tuesday. (Leader illustration/TIMOTHY RITTER)

NILES — The sun was beating down on the hilltop of Brandywine’s baseball diamond Tuesday afternoon for a BCS doubleheader against Comstock.

The Bobcats’ defense started out strong, but midway through the first game, they lost their luster and gave up at least one run in eight of the final nine innings played.

The visiting Colts swept the doubleheader from Brandywine, winning 7-5 in the opening game and 11-1 in the nightcap.

The sweep dropped the Bobcats to 10-7 on the season.

“I felt we hit the ball better overall than we have been, which is a good sign — Ty (Mickiewicz) and Joey (Coveyeou) especially,” said Brandywine coach David Sidenbender. “We are trying to overcome some injuries (Gabe Gouin broken hand, James Vaughn broken collarbone and Caleb Cole broken hand) which makes it difficult to get some consistency and depth.”

In the first game, Mickiewicz went 4-for-4 at the plate, which included a double and RBI. Joey Covyeou added a couple of extra base hits and two runs.

The biggest issue of the night for the Bobcats was the base running, as four runners were left in scoring position, along with a devastating seventh inning where three Bobcat errors led to three unearned runs for the visiting Colts.

Mickiewicz suffered the loss on the mound, striking out six and walking two through six innings.

In the nightcap, the game was called after the sixth due to a mercy rule.

Comstock continued to capitalize off of six Brandywine errors while keeping the bats hot with 11 hits.

The Colts were able to score four of their 11 runs by sacrifice hits.

Coveyeou started and took the loss for Brandywine.

“We are a young bunch and it is a learning process,” Sidenbender said. “And it will continue to be.”

Niles’ Brooke Timm pitched the Vikings to a 6-5 win over Portage Central in the opening game of its SMAC West Division doubleheader. (Leader photo/SCOTT NOVAK)

The Vikings won the opening game 5-1 before getting a walk-off bases loaded walk in the nightcap to win 6-5.

Trailing the Mustangs 5-3, Robert Buckland doubled to open the bottom of the seventh for the Vikings.

Cole Simpson singled to advance Buckland to third before Chad Barton doubled to score Buckland and Simpson to tie the score at 5-5.

Portage Central then issued an intentional walk to Kendall Whitelow before Brayden Lake singled to load the bases.

Johnny Bybee drew a four-pitch walk to drive in the winning run.

Niles finished with nine hits, including two each by Simpson, Lake and Buckland.

Chandler Dodd, the third Niles pitcher of the night, picked up the victory as he allowed one hit and one strikeout in the seventh inning.

The Vikings used a four-run fifth inning to break a 1-1 tie in the opening game against the Mustangs.

Niles had nine hits, including two each by Simpson and Zayne Neumann. Whitelow added a triple and three RBIs.

Tayton Stevens went the distance to earn the victory. He allowed one run on nine hits with four strikeouts.

The Vikings held on for a 6-5 win over the Mustangs in the opening game, but dropped the nightcap 8-4.

Brooke Timm tossed a three-hitter to earn the victory for Niles.

The Vikings finished with 13 hits, including a 3-for-3 performance by Addison Davies.

In the nightcap, Portage Central used a six-run second inning to erase a 3-0 Niles lead.

Niah Zavitz took the loss for the Vikings.

Niles finished with nine hits, including a 3-for-3 performance with a triple by Aynslee Myer.

Daly also tripled, while Sadie Foutain was 2-for-4.