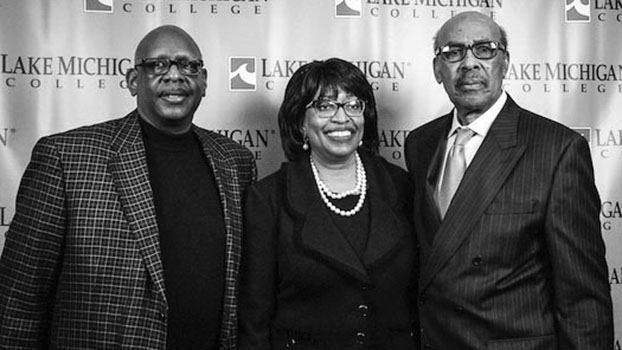 BENTON TOWNSHIP — Lake Michigan College recognized the 2018 honorees of the alumni and distinguished service awards during the 71st annual commencement ceremony at The Mendel Center on May 6.

The Bernard C. Radde Distinguished Service Awardees are Mike and Lisa Welch. Named in honor of the late Dr. Bernard C. Radde, who served as a member of the Lake Michigan College Board of Trustees for twenty-five years, this award is presented to an individual or individuals who have advanced the cause of Lake Michigan College and higher education.

Mike and Lisa Welch are long-time supporters of the college, with both of them serving on numerous boards and committees, giving generously of their time and resources.

The Welch’s have been involved with the Winner’s Circle Benefit Auction for more than 16 years, beginning as guests, and then as event chairs in 2010. In 2011, they established the Mike and Lisa Welch Family Endowed Scholarship, and Lisa continues to serve on the auction’s executive committee.

Mike has served on the Lake Michigan College Foundation board since 2002, and was board president from July 2012 to June 2014. During the Foundation’s Campaign for Tomorrow, Mike provided leadership as a cabinet member. The Welch’s contributed as donors to the construction of LMC’s new Wine and Viticulture Center and Lisa serves on the board of Lake Michigan Vintners teaching winery and tasting room.

Mike is the President of Magnate Worldwide and founded the freight expedition company Express-1. He serves on numerous other boards in southwest Michigan.

The Welch’s both grew up in Berrien County. Lisa is a graduate of Edwardsburg High School and Michigan State University. In addition to Lake Michigan Vintners board, she also serves on the Curious Kids Museum Board of Directors.

The Welch’s and their two children live in Stevensville. Kara is a sophomore at Michigan State University, and Carter is a junior at Lakeshore High School.

The Alumni Service Award is presented to Joseph DeFrance, Jr. of St. Joseph. This award is given to alumni who have made important contributions, personally or professionally, to the community or Lake Michigan College.

Joseph DeFrance, Jr. graduated from Benton Harbor High School in 1949 and attended LMC before transferring to Western Michigan University. At that time. LMC was named Benton Harbor Junior College and classes were held in the lower level of an old elementary school on Pipestone Avenue.

DeFrance fondly remembers the closeness between the administration, the faculty and the students. He recalled how much his instructors cared about students getting the most out of their classes, and perhaps this experience partly inspired DeFrance to lead an exemplary life of service to our country, our community and our college.

DeFrance served in the United States Army before working for the IRS from which he retired in 1990 after almost forty years. In addition to his work life, he has volunteered at the local St. Joseph/Lincoln Senior Center, and as a mentor to children in the Y-Uncles and HOST programs.

DeFrance has volunteered as an usher for The Mendel Center for 25 years.

In 2010, he was named The Mendel Center’s Volunteer of the Year. He has also been recognized with the Salute to Excellence Award from the Women of Alpha Kappa Alpha Sorority in Benton Harbor.

DeFrance and his wife, Diane, have been married for 63 years, and have two daughters and four grandchildren.

The Clarence Beckwith Distinguished Alumni Award is presented to Cynthia Joseph-Keller of North Richland Hills, Texas. Named in honor of the first president of Lake Michigan College, the award is given to alumni who have achieved significant success in their personal and professional endeavors.

Cynthia Joseph-Keller is assistant vice president at DexYP with an extensive background in real estate, facilities and sourcing. She has previously worked for SuperMedia and Verizon, where she was recognized for her leadership and individual excellence.

Joseph-Keller came to Lake Michigan College in 1973 to study business administration while working at Whirlpool. After completing her associate degree, her academic success at LMC earned her a scholarship and she transferred to Ferris State University. She graduated with a bachelor’s degree in finance, with honors.

In 1990, after relocating to Texas, she continued her education to earn an MBA in corporate finance from University of Dallas. She is a Six Sigma Green Belt and member of the Dallas/Fort Worth Minority Supplier Development Council Board and is the treasurer for The Links, Incorporated-Fort Worth (TX) Chapter.

Joseph-Keller credits her “topnotch” professors and counselors for providing invaluable support, encouragement, and an excellent academic foundation that prepared her for her continued education and career.

Joseph-Keller and her husband, Moses Keller, have one daughter, Madeline Keller, who is also working toward an MBA.

Nominations can also be made online at lakemichigancollege.edu/nomination. Nominees must have earned at least 30 credit hours at LMC or at one of its predecessors. Upon nomination, an application will be sent to the candidate.

CASSOPOLIS — At the Cassopolis Board of Education special meeting on April 30, Superintendent Angela Piazza proposed a restructuring of... read more