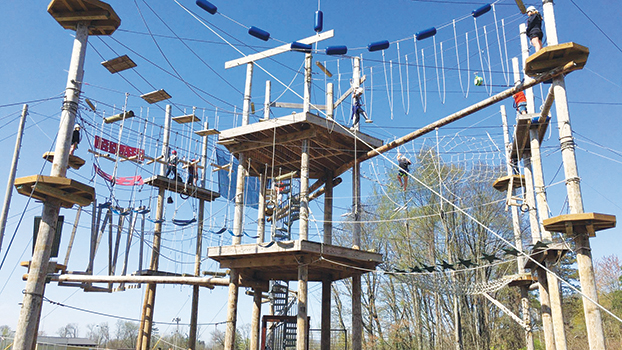 The Dowagiac Five Star Program will be hosting a fundraiser May 12. The program works to create leadership skills in local middle schoolers. (Submitted photos)

The Dowagiac Five Star Program will be hosting 2011 “The Voice” contestant Tim Mahoney for a fundraising concert from 6 to 10 p.m. May 12, at the Dowagiac Elks Lodge. The cost of a $50 ticket will include the concert, a catered dinner and light snacks. Optionally, $25 tickets to just the concert are also available. The Five Star Program is collaborating with the local Kappa Beta sorority for the event.

The Five Star Program, an after-school program that aims to help youth gain leadership skills, get help in academics and just get a chance to be a child. The program is free and open to any middle school student. Some of the students are at-risk youth who face a difficult home life. Others just need a place to go after school, while still others need a positive role model, according to program leaders.

Money raised from the concert will go toward sending children to day camps and other activities within the Five Star Program. Additionally, the program hopes to expand to two days a week, rather than one day a week, said Dan Leversen, one of the organizers of the concert.

“Five Star teaches respect and sacrifice and things like that. These are all leadership qualities,” Leverson said. “We are going to take what we make from this and give it right back to the kids.”

Leversen said the program is important because it can reach children at a time in their life, when they need direction and guidance. In his seven years with the organization, Leversen said he has seen first-hand, including the fact that, according to the Five Star Program website, 70 percent of children in the program raise their grade point average or maintain a 3.0 or above.

“In high school, it is very hard to reach kids at that point. Middle school is kind of last place we feel we can change these kids,” Leversen said. “A lot of these kids don’t have after school activities, so we want to fill that time with skill. We listen to them, and we listen to their concerns, and we make a big impact.”

Leversen and other Five Star representatives are hopeful that the concert will bring in money for the program.

“We really wanted to do something different than all the golf outings you see everywhere,” he said. “We thought this would be a fun alternative.”

Additionally, Leversen said he hopes the community will turn out to the event not only to enjoy a fun night out, but to support the local youth.

“We have the opportunity to make differences in these kids’ lives — not a little difference, big differences,” he said. “We can affect this entire community. … A lot of the problems for kids happen between 2:30 and 5 p.m., when they don’t have something to do. We want to provide for them a space to not only to fill that void, but to build them up.”

For more information or for tickets, contact Leversen at sleversen@gmail.com. Tickets will also be available at the door of the event.

BUCHANAN — The Civil War will be the focus of a special Cemetery Walk at Oak Ridge Cemetery Saturday. The... read more