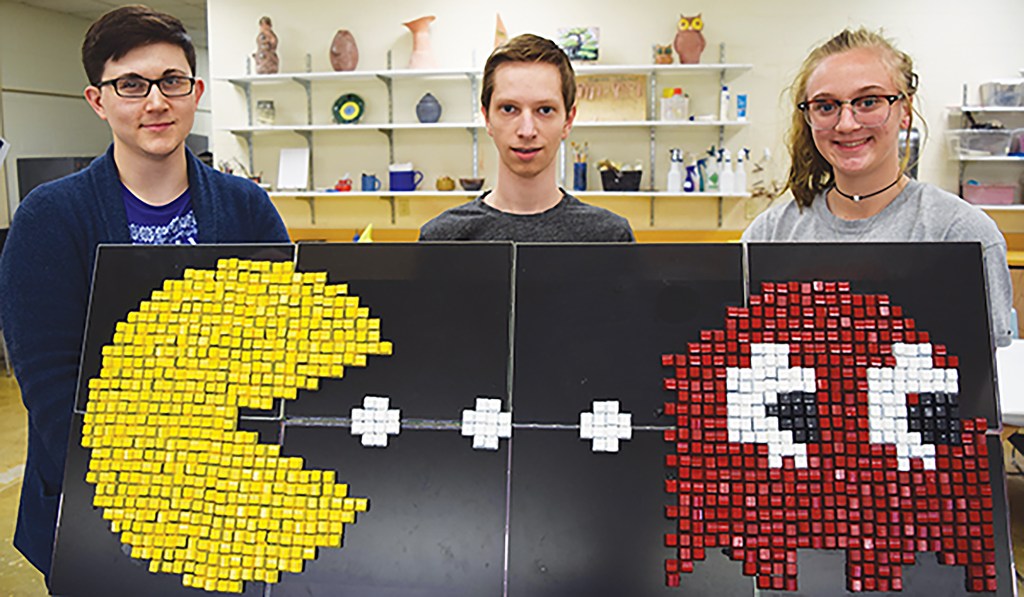 With cooperation from Computing Services’ Nick Suttle, five teams of students cannibalized his department’s storeroom for materials from which they created a video game timeline installed on May 1 in room 462. It starts with Pac-Man chasing a Ghost made from 1,035 keyboard keys displayed on a backing of eight computer monitor screens. The original arcade game debuted in 1980.

The timeline also pays homage to Link from Nintendo’s The Legend of Zelda, 1986; Spyro, a purple dragon released for PlayStation in September 1998; Master Chief from Halo, the 2001 military science fiction video game; and a wolf medallion with disc eyes worn as a necklace by protagonist Geralt of Rivia in The Witcher fantasy novels soon becoming a Netflix series.

“I’m proud of the creativity of our students,” SMC President Dr. David Mathews said, “and that the academic side is working with Computing Services to turn old parts into imaginative art instead of adding to a landfill.”

Alexa Cameron from Lawton, Chris Ramos from Bangor and Eric Thiele from St. Joseph glued red wiring like a licorice mosaic on the dragon’s wings, shaded with orange and yellow.

Cameron, who is considering applying to Kendall College of Art and Design in Grand Rapids for animation, noted that “it took forever to cut the metal, but then it really came together.”

“We’re spray-painting scrap metal for a Mohawk up top,” said Thiele, who would like to work for an entertainment company designing props. Ramos hopes to transfer to Ferris State University for digital animation and game design.

Martinez intends to transfer to Bethel College in Mishawaka for a secondary education degree to teach high school art. Pope, an English major, also wants to teach and plans to transfer to Western Michigan University. Gray goes back and forth between art history and ceramics.

“I’m really excited to see how the projects turn out,” said Pope, who started college anticipating becoming a pediatric oncologist. “Each group built differently than everybody else. Being able to come here and work with other people to create something hundreds upon hundreds of people get to see thrills me.”

Valenzuela would like to combine her passions for stories and art into a comic book career. Interior design interests Bute. McCain, though, provides the most unique take on art possibilities with her ambition to become a taxidermist: “My dad always wanted to, but he says he’s not creative enough because it’s sculptural, so he encourages me. There are deer heads, bears and foxes all over our house. My dad wants us to open a business when he retires,” said McCain, who hunts with her father.

Southwestern Michigan College is a public, residential and commuter community college founded in 1964. The college delivers above-average graduation/transfer rates compared to other community colleges nationally and student college-level course success that is consistently in the top 25 percent of two-year colleges nationally. SMC strives to be the college of first choice, to provide the programs and services that meet the needs of students and to serve our community, according to officials. The college is accredited by The Higher Learning Commission of the North Central Association of Colleges and Schools and is a member of the American Association of Community Colleges.