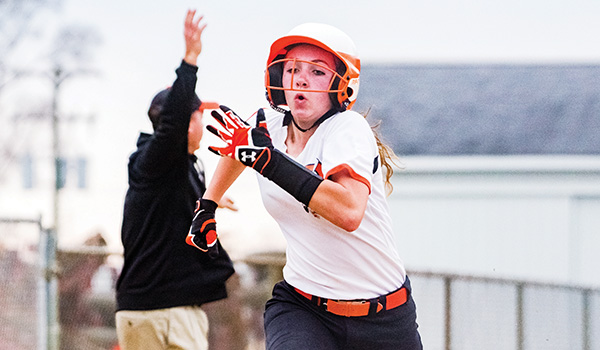 OTSEGO — Visiting Dowagiac dropped to 1-9 on the season following a sweep by Otsego in Wolverine Conference softball Friday.

The Chieftains lost the first game 13-12 on a walk-off double, while in the nightcap, the Bulldogs scored 17 runs in the first inning on its way to a 23-7 victory.

In the opening game, Otsego trailed 12-11 in the bottom of the seventh inning when Avery Neville doubled on a 1-2 count, scoring two runs.

Chieftains got on the board in the first inning when Jessie Hulett singled on a 1-2 count, scoring one run.

In the bottom of the sixth inning, Otsego tied things up at 11 when Skylar Anderson tripled, scoring one run.

The Chieftains put up three runs in the second inning. Shelby Jackson, Anna Dobberstein and Taylore Froehlich each had RBIs in the frame.

Otsego scored five runs in the third inning. Otsego batters contributing to the big inning included Anderson and Madison Kinnane, who all drove in runs.

Kinnane pitched Otsego to victory. She allowed three hits and two runs over one inning, striking out two and walking zero.

Amiyah Smith took the loss for Dowagiac. She allowed 16 hits and 13 runs over six and two-thirds innings, striking out two.

Chieftains tallied 18 hits in the game. Whitaker, Smith, Dobberstein, Natalie Davis and Mekenna Gaideski all had multiple hits for Dowagiac.

In the nightcap, Smith had a pair of hits and an RBI for the Chieftains.