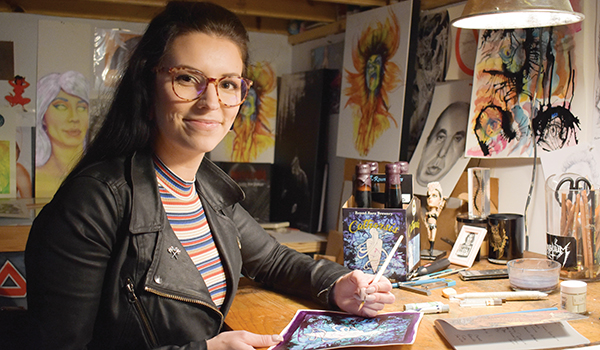 NILES — Pick any beer on the store shelf and the beverage will likely seek to entice buyers with a catchy logo. For many local breweries, the use of artwork instead of Photo Shopped images has become a popular tool to not only catch the eye, but also to create a more memorable beverage.

When Baroda-based Round Barn Brewery decided they wanted to visually represent the recent release of their bottled four-pack of barrel-aged Russian Stout beer called Catharsis, they knew they wanted a local artist to do the job. Niles’ Christina Casperson, who has created works of art for bands across Chicago, businesses and through her role as a forensic artist with the Niles Police Department, seemed like an ideal fit.

As a forensic artist, Casperson spends her working hours recreating the faces of suspects and victims tied to local crimes. Casperson studied art at the Laguna Beach School of Art and Design and Western Michigan University. While she enjoys that her profession keeps the technical side of her skills sharp, she likes creating much more than her job duties outline.

Her Niles studio is testament to this. From Jackson Pollock style paintings to colorful sketches and paintings, Casperson’s mixed media style influences creations of multiple genres.

Casperson attributes her connection to Round Barn through her boyfriend Jordan Roberts, who works as the brewery’s graphic designer. Roberts advocated for Casperson to take the lead on the design. With her work speaking for itself, the officials at the brewery agreed to give her a shot.

Casperson is no stranger to turning a sensation like sound into a work of art. Before returning to her hometown of Niles, Casperson lived in Chicago where she created album covers for bands, among a number of other projects. But creating something visual based on the flavor profile of a beer and its namesake was a new challenge.

“Catharsis is a really hard word to work with. Everybody had a different idea of what Catharsis could be, so we came up with two things. We wanted some swirling bright colors and a figure,” Casperson said.

Since January, Casperson has been working on the design with input from Malkam Wyman the company’s head brewer, and friends, while Roberts helped with the art’s layout and packaging aspects.

The result of her work was a solid white figure with a wispy beard floating in a webbing of blue, purple and black.

In a short YouTube video describing the Catharsis’ creation, Wyman said they wanted to commission a local artist to make the beer stand out. When he saw what Casperson had created for the beer, he said he was impressed.

“We have been really excited because this is a first-time endeavor to release Catharsis as a four pack,” Wyman said. “When Christina showed me the art, I was pretty blown away.”

For her part, Christina said she was happy with the outcome of the design. Having art to represent their beer will serve as more than a way to catch the eye, she said.

“I feel like it makes it feel more personal,” Casperson said. “When you see clipart, to me, it feels so corporate. But then when you see actual hand drawn artwork versus PhotoShop, you feel like you are drinking toward a good cause.”

The next time thirsty patrons visit a store for a beer, they might see other brewers catching on with this idea and utilizing local artists’ work to represent their product.

“You are actually investing in people around here who are trying to make a living,” Casperson said.

Those interested in seeing more of Casperson’s art can view her work through May 19 at the Round Barn Public House, 9151 First St., Baroda.

In Niles, Casperson’s work can be seen at the Brass Eye, where a drawing of the business’ owner Bryan Williams hangs behind the bar. Williams has also asked for Casperson to create a “Tiki man” for his upcoming brewery, Voyageurs.

As to one consistency viewers can expect with her art, Casperson said creating something that evokes a response is a must.

“I am trying to open people’s eyes to different art,” Casperson said. “I want something different that is going to make people feel something.”

LANSING — Although Michigan traffic deaths remained above 1,000 for the second consecutive year, there was a 3 percent decrease... read more