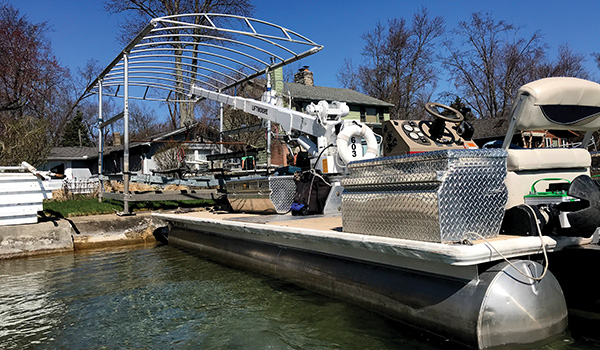 Area dock installers working around the clock to prepare for summer

The warming weather is invigorating many Cass and Berrien County lake residents — causing them to daydream of pontoon rides with their family and friends, hot dogs on the grill and long weekends.

Every year, lake season kicks off with countless Memorial Day weekend celebrations. Almost every lake house in the area will have something going on: be it a party or a small gathering, but in order for that to happen, each house needs to have its dock installed. While this process may seem straightforward, it actually takes an immense amount of time and effort.

Dock and pier installers, such as Doug Martin of Martin Unlimited, are so busy preparing for Memorial Day that they start putting in docks as soon as the ice thaws.

“We usually start as soon as the ice comes off, which is usually around the beginning of March,” Martin said. “In the fall, everything has to come out, so in the spring we have to put all the pipes and the stands back into the lake and, of course, all of the pier sections on top. Then we set in the boat lifts with the crane, and we add the benches, ladders and stairs and get it all set up for the season.”

When installing docks, Martin and his crew often have to get in the water, which means they must be prepared for the elements. They wear wetsuits, waterproof waders and, if necessary, raincoats.

“We typically work in the snow, ice, freezing rain and it’s always windy in the spring,” he said. “There are times where it will freeze again and we will get a thin layer of ice on the lakes when we’re working, but it’s not going to be a hard freeze.”

Currently, Martin has around 450 accounts on many of the area lakes, as well as the St. Joseph River. Each account varies in how long it takes to install — some will take about an hour and others half a day.

In order to service all of his accounts before Memorial Day, his crew works six or seven days a week for 10 to 12 hours per day. Employees are not strangers to 70-hour work weeks.

Martin, on the other hand, works even more. He starts his day at 5:30 a.m. and almost immediately starts working and continues to do so until he goes to bed at 10:30 p.m.

To keep he and his workers from wearing down, they use thick styrofoam floatation devices to help them move pipes and sections of the dock. But it is still a difficult job to do day in and day out.

“It’s a lot of walking and a lot of lifting — all day long you’re walking through the water with waiters, carrying sections of dock and pipes,” he said. “You have fresh air, water and a lot of exercise, which makes for very good sleeping at night.”

The long hours and demanding labor make it hard for Martin to retain employees, but he makes do. Currently, he has three employees working with him on dock installations.

Once all of the docks are in, Martin will focus on the other portion of his business, which is to put in fences and deck railings. However, come September, it will be time to start taking of the docks out of the water.

“We can start as early as Labor Day, but generally people wait until the end of September or the beginning of October, and I always finish the second week in December,” Martin said. “There’s only been twice in my 22 years that we had an issue with bringing everything in before the water froze.”

While Martin’s work is strenuous, he says that it’s better than it seems.

“There have been times where people think we’re insane, but it’s not as bad as people think,” he said. “We are working so we have a lot of body heat. A lot of times we will get out of the lake and steam is rolling off of us because our bodies are warmer than the air.”

One injured in Howard Township crash

HOWARD TOWNSHIP — A Niles man was injured in a Howard Township crash Thursday, according to the Cass County Sheriff’s... read more