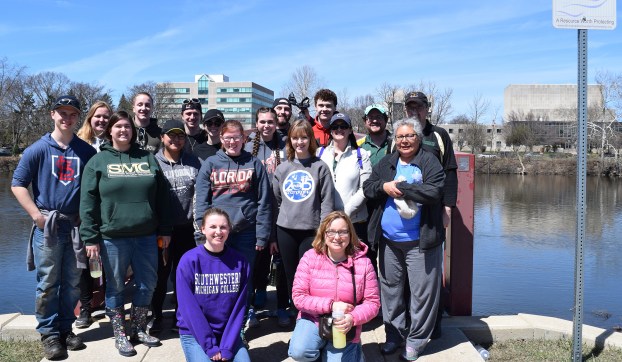 This collaboration is one of many being pursued by the two institutions separated by only 30 miles, according to SMC officials. Besides developing partnerships by which SMC graduates can transfer to IUSB, this shared commitment to the region’s environment could be further enhanced this fall with plans for a similar clean-up on the Michigan side of the state line.

“We are standing on the sacred land of the Pokagon Band of Potawatomi who remind us they have always lived here and will forever live here,” Karakatsanis said. “We want to make this a regular event.”

“SMC students have been environmentally conscious for 50 years, since Phil Locker was a student studying ecosystems,” SMC President Dr. David Mathews said about the event.

Dr. Phillip L. Locker Jr. was a member of SMC’s 93-member first 1968 graduating class. Locker not only achieved his goal of becoming a dentist, the past president of the Alaska Dental Society practiced in Anchorage. A narrow basin of water across M-62 East opposite the Mill Pond at the base of Dailey Road was dubbed “Locker’s Pond” in SMC’s early days.

“This is a great example of public-private partnership in the way it blends the university and public space. This space feels very open to the community,” Aaron Perri, Executive Director of Venues, Parks and Arts for the City of South Bend said while planting a tree. “I played my first round of golf right about here.” The site occupied today by on-campus student apartments was Playland Park amusement park from 1925-1961 and later featured a nine-hole lighted golf course and a miniature golf course.

“The college has always been part of making the community a better place,” Mathews said. “SMC is proud of what our students continue to do today.”

Southwestern Michigan College is a public, residential and commuter community college founded in 1964. The college delivers above-average graduation/transfer rates compared to other community colleges nationally and student college-level course success that is consistently in the top 25 percent of two-year colleges nationally, according to SMC officials. SMC strives to be the college of first choice, to provide the programs and services that meet the needs of students and to serve our community. The college is accredited by The Higher Learning Commission of the North Central Association of Colleges and Schools and is a member of the American Association of Community Colleges.