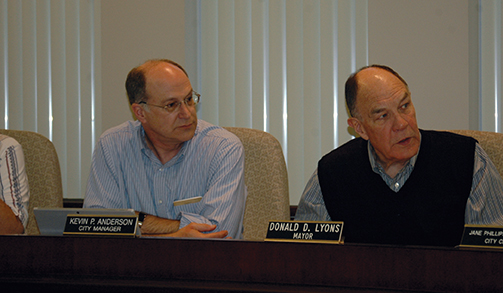 DOWAGIAC — The city of Dowagiac is looking to a newly proposed ordinance to help solve the problem of urban decay within the city.

At Monday’s Dowagiac City Council meeting, the council hosted a first reading of a new ordinance that would move blight from a criminal issue to a civil infraction. This would both allow blight cases to move more quickly and to impose escalating fees on repeat offenders, according to City Manager Kevin Anderson. “Over the last year, city council has made it one of its highest priorities to reduce the blight conditions in the city,” Anderson said. “Part of that is knocking down buildings when they are substandard … The other part is to have inspectors go out and when they see houses that violate the ordinance, they can notify owners and be able to seek compliance.”

However, a problem can arise when a homeowner refuses to comply, which is what the new ordinance would help address, Anderson said.

“We wanted to see how we could make that process go fast. How we could make it more meaningful to get blight cleanup quicker,” Anderson said. “We certainly, as a city council, want to be able to say to neighborhoods, ‘you shouldn’t have to live next to all this stuff.’”

“The person would still have their day in court and an opportunity if they feel aggrieved to go through a due process,” Anderson said. “What this does is add teeth to [the existing blight ordinance], add speed to it and add consequence to noncompliance. That was the purpose of this.”

Council member Charles Burling, who has been a vocal advocate of removing blight from the city and a member of the Dowagiac Citizens Review Commission that reviews blight cases, said he is in favor of the proposed resolution.

“One of the frustrations with review commission is the length of time it took to have a blight cases dealt with. … It could literally be years before a true piece of blight was cleaned up,” Burling said. “I’m very tickled with the way [the proposed ordinance] is written. I feel it would give us the ability to get some areas cleaned up. It’s designed to clean up blight, not to single out people and give them a hard time. It’s not fair to the people living in a neighborhood to live next to someone who is a hoarder or someone who just doesn’t care.”

Mayor Don Lyons added that he would like to see the proposal passed because he believes that blight affects the entire community through declining property values.

“This is a critical next step for us,” Lyons said. “Blight is something that affects everyone.”

Anderson said the proposed ordinance could become actionable law quickly, if the council considers action on the item at its May 6 meeting.

“From the time we are talking now, we are about three or three and a half weeks out from this being law that would be enforceable,” he said.

NILES — When a red-tailed hawk hunting for its supper last Saturday collided with a net at Hacker’s Golf and... read more