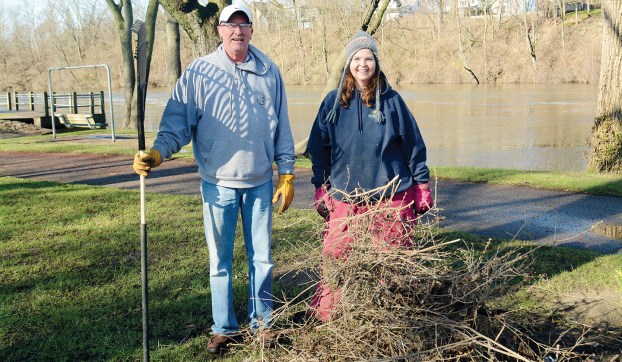 NILES — In between a bush and a growing pile of pruned branches, Ericia Thomas, of Niles, wielded a pair of garden sheers in the early morning chill Thursday to beautify Riverfront Park.

Pairing back wily branches and picking up debris, Thomas, who works for Honor Credit Union, was one of more than 70 volunteers from companies across Michiana who volunteered to spend the day outside of the office bettering their community.

Thomas said she often brings her two children to Riverfront Park to play and said she felt the project was a worthy cause.

“We come down here all the time,” Thomas said. “Might as well make it look pretty.”

The third annual park cleanup was organized by Tom Payne, a Niles branch IGS Energy employee. Each year the company, which is based in Ohio, allows employees to spend a day volunteering for a cause of their choosing for the annual IGS Impact Day of Service. Payne said he identified Riverfront Park because it is important to the Niles community.

What started as an effort between Payne and two other IGS employees has since grown into a much larger effort with a greater outreach. This year, nearly a dozen companies and more than 70 people volunteered to join Payne and spend a day sprucing up the park.  Students from Cedar Lane High School also joined in the effort.

“It was really organic,” Payne said. “People were really excited about cleaning Riverfront because they use it and it is really the centerpiece of Niles.”

This year, volunteers’ efforts were particularly important because recent flooding damaged the park. After several feet of water swept up the banks of the St. Joseph River, debris, trash and river sediment was left behind. The city made extensive efforts to restore the park, but volunteers Thursday helped to complete some finishing touches.

Volunteers spent the day working from the north to the south boat dock in the park.

They swept up remaining sand carried from the floodwaters, cleared debris from the branches of bushes and pruned, raked and cleared pathways and boat docks in the park.

“The city has been cooperative in giving us a lot of autonomy to do what is necessary,” Payne said. “We are doing a little bit more [this year] because we have more people and more tools.”

As the weather finally begins to warm this week, with temperatures in the 50s and 60s and more people are expected to return to the park, Payne said he thinks people will notice a difference.

“We are confident that they will,” Payne said. “Everyone is working hard.”

Joe Ray, the department of Public Works manager, said the city reopened the park play equipment late last week, after replacing the mulch which was contaminated by floodwater.

Payne said he saw many volunteers take ownership of the project Thursday.

“People are bringing their own personal tools and whatever they can do to assist,” Payne said.

At the Veterans’ Memorial, a group of volunteers trimmed trees, yanked weeds from sidewalk crevices and swept up leaves and dirt.

Doug Baumgartner, of South Bend, had been at Riverfront Park since 7:30 a.m. Thursday. Baumgartner, who works for Martin’s, said he participated in the event last year and liked the chance to lend a hand.

“This is a good thing to give back to the area,” Baumgartner said. “It is a good day to get outside and help the community.”

ST. JOSEPH — The Berrien County Board of Commissioners recognized two Dispatchers of the Year April 12 during a regularly... read more