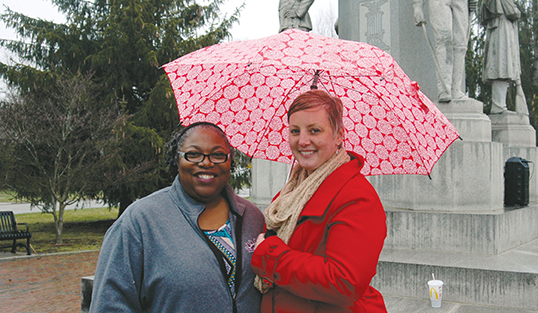 DOWAGIAC — As cold rain misted over James E. Burke Park Wednesday evening, a woman who identified herself as Barbara clutched a set of white papers, now curling from the moisture in the air, in her right hand. As she read from the papers, her voice was composed, calm, rehearsed. However, a quiver in her hand gave way to a certain nervousness.

“This evening, I would like to share a few of my family’s truths with you,” she said. “The truth is a single instant can change your life forever. The truth is there is a power behind words. … My daughter was raped.”

Barbara’s story was one of several told Wednesday, as more than a dozen people huddled under umbrellas and warmed their hands with cups of hot coffee just outside of downtown Dowagiac during Domestic and Sexual Abuse Services’ Take Back the Night event. The event was hosted as one of several events DASAS is hosting in recognition of sexual assault awareness month.

Starting in Florida in the 1970s, Take Back the Night has grown to become a national rally to address and make people aware of the problem of sexual assault in the United States. Though numbers may vary based on reporting source, one in six American women and one in 33 American men have been victims of attempted or completed rape, according to the Rape, Abuse and Incest National Network. These numbers disproportionately affect minorities and people of color. A 2015 Department of Justice report claimed that an American is sexually assaulted every 98 seconds.

It is because of these staggering statistics that DASAS continually works to help victims of sexual and domestic abuse and shines a light on the problem of sexual assault through events like Take Back the Night, said DASAS Director Kim Kramer.

“We want to show that we are not just saying something, we are doing something,” Kramer said. “We want to support survivors. When survivors see that support, they tend to feel more believed. … We want that tangible support that we believe survivors need.”

DASAS has a long history of supporting survivors in Cass, St. Joseph and Van Buren counties with services such as counselling and housing assistance and with events like Take Back the Night, Kramer said.

Wednesday’s event marked the first time in nearly a decade that DASAS has hosted a Take Back the Night event in Dowagiac.

“We rejuvenated it and breathed some new life into it,” said Deborah Hackworth, director of advocacy services at DASAS. “We wanted survivors to know that they have a voice, the community will stand with them and that there are services available to them if they want to reach out.”

In her speech to the crowd, Barbara also highlighted the need to give victims and their families the support they need to have a voice, which events like Take Back the Night can provide. She added that survivors need support and they should not be expected to keep quiet about what happened to them in order to keep others from being uncomfortable.

“One of the biggest lessons I learned [in the aftermath of her daughter’s rape] is that God gave me a big mouth for a reason. I learned not to use my inside voice,” she said. “My daughter used her voice to defend herself, to ward off shame. … I made sure that when we needed to speak, we didn’t use our inside voices. We didn’t put our heads down.”

Both Kramer and Hackworth said that the community will step up to support survivors of sexual assault this month, even if they did not attend the Take Back the Night event.

“This is a time to surround survivors with support,” Kramer said. “Even just believing victims when they tell you their story is supporting them. … That is important this month and all year round.”

DASAS provides 24-hour support to victims of sexual and domestic abuse. To receive assistance from a DASAS representative, call the organization’s hotline at 1 (800) 828-2023.

NILES — In between a bush and a growing pile of pruned branches, Ericia Thomas, of Niles, wielded a pair... read more