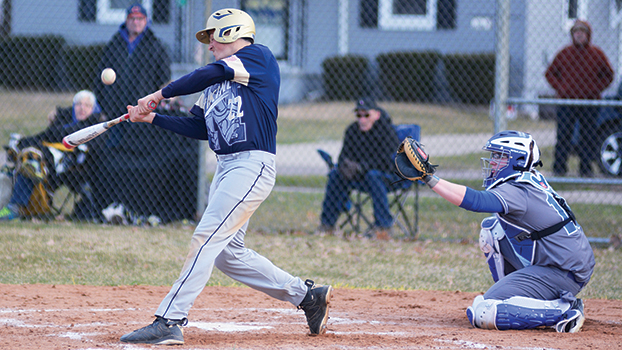 Niles’ Brayden Lake homered to help the Vikings to a sweep of Loy Norrix in Kalamazoo Thursday. (Leader photo/SCOTT NOVAK)

The Vikings improved to 5-0 on the year with the sweep of the Knights.

In the opener, Niles banged out 14 hits, including a pair of doubles by Chad Barton and Chad Vota. Kendall Whitelow also had a double for the Vikings, who finished with eight hits in the nightcap.

Brayden Lake added a home run in the first game. He finished with four RBIs.

Jared Hainey, Josh Lotsbaich, Cole Simpson and Lake each had a double in the second game.

Tayton Stevens went the distance in the opening game to earn the victory.

In the nightcap, Lake went the distance to earn the victory.

He tossed a one-hitter with eight strikeouts and a pair of walks.

The Raiders won the first game 3-1, but Buchanan rallied to get the split with a 10-3 win over Decatur.

In the nightcap, Brad VanOverberghe picked up the victory in relief.

Jordan Williams started for the Bucks before giving way to Jacob Clayton.

VanOverberghe came on in the second inning and went the rest of the way.

He also had a double for the Bucks, as did Jacob Hoover. Josh Reed added a double.

In the opener, both teams struggled offensively and finished with a pair of hits.

Hoover took the loss on the mound for the Bucks.