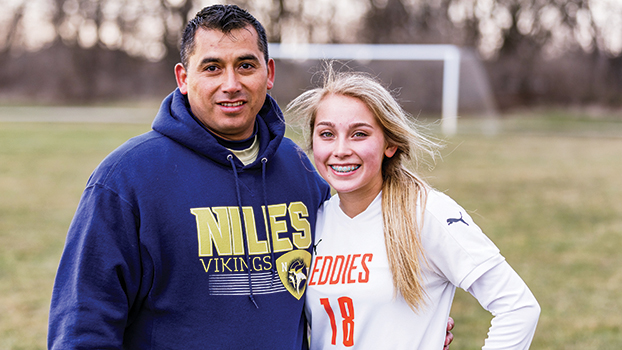 Niles soccer coach Abel Fonseca (left) had to coach against his daughter MaKenna during the Vikings’ 4-1 loss to Edwardsburg Tuesday. (Leader photo/TIMOTHY RITTER)

Daughter gets the best of coach dad

EDWARDSBURG — For first-year Niles coach Abel Fonseca and his daughter MaKenna Fonseca, who is a returner for Edwardsburg, Tuesday’s match was still enjoyable.

An added bonus to the Eddies’ 4-1 victory over the previously undefeated Vikings was when MaKenna scored a goal in the second half.

“It felt good,” she said. “He taught me how to shoot that goal so I used it against him.”

Abel said it was hard.

“You want to cheer for a minute and then you want to sit there and coach your team,” he said. “It was the first time in a long time. So, it was hard.”

And what about the goal she scored?

“You train them the best they can be and you want to see them have success,” Abel said. “For her to turn and get that shot off I was excited for her because I knew how much the game meant. But it hurt as the coach of the other team.”

Ashley Low scored a pair of goals for Edwardsburg (2-0), including the only one of the open 40 minutes.

Regan Blue assisted on the first goal, while Claire Bartz would assist on Low’s second goal.

Bartz also scored a goal off an assist by Morgan Laskowski.

The lone Niles (2-1) goal of the match was second by Dayleigh Miller.