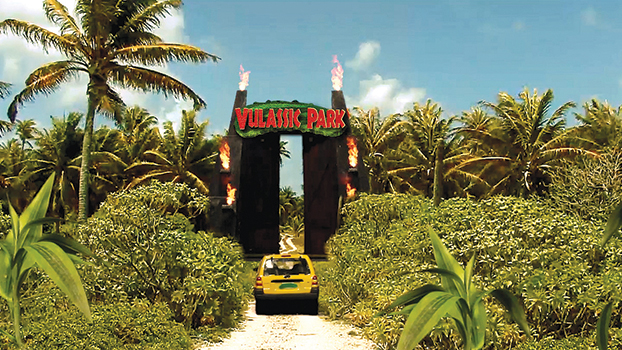 EDWARDSBURG —  In a pivotal scene in the 1993 edition of “Jurassic Park,” Ian Malcolm, played by Jeff Goldblum, is hanging out the back of a jeep as he narrowly escapes the sharp teeth of a pursuing Tyrannosaurus rex. During the chase, the carnivorous dinosaur breaks through large tree limbs as it stomps its way down the muddy road.

The monumental moment in movie history left teenagers and adults alike scared of creatures that had been extinct for millions of years.

One such viewer was Tim Richardson, a local filmmaker and current Edwardsburg resident, who first saw the movie as a college student.

“It got to the point that when you went out to the parking lot you expected a T-rex to eat you,” Richardson said.

Instead of wallowing in terror, Richardson decided to have some fun with the film. Thus, the idea for “Vulassic Park” was born, a “Jurassic Park” spoof where, instead of prehistoric reptiles, the film centers around dinosaur-like pickles.

At first, Richardson and his friends struggled to make the film the way that wanted to look. That is, until now.

“‘Vullasic park’ was actually a film we tried a couple of times while were in college,” Richardson said. “At that time, the quality that was available and our schedule was somewhat limited. Some of the cast and crew has bugged me for years to remake it. We decided that it was time to do it. We actually brought back some of the actors and the folks from the original one that we made years ago to be in it.”

In “Vulassic Park,” extinct picklesaurs are brought back to life. Investors in the theme park, Vulassic Park, need the approval of some experts, including picklentologists, but then a tropical storm sets the island into chaos and ferocious picklesaurs escape their pens.

“I just want people to have a lot of fun looking at the movie and moaning and groaning at the terrible pickle puns that permeate it,” Richardson said.

In order to remake the movie, Richardson started polishing up the original script about two years ago. Then, during the summer of 2016, he and his crew shot the movie on nights and weekends. Throughout this past year, he spent more than a year arranging the movie and adding special effects.

The film includes a number of different pickle-renditions of dinosaurs, such as a velocigherkin (velociraptor), a Tyrannosaurus dill or T-dill (Tyrannosaurus rex) and a Dillspearasaurus (brontosaurus).

“They are all puppets,” he said. “Some were built to actual size. The velocigherkin is actually a giant puppet, but the t-dill is only a few feet tall and then is composited in to look larger.”

Richardson also used a green screen to make the characters appear as if they are in faraway locations.

The producer of the film was Michael Kouroubetes who, along with Richardson and other members of the crew, have made other parodies including “The Dork of the Rings,” “Harvey Putter and the Ridiculous Premise” and “The Throbbit.”

“‘Jurassic Park’ had a huge impact on me as a moviegoer and a young filmmaker,” Richardson said. “I only parody material that I have an emotional connection with, and for years I’ve thought about trying to do this particular parody idea the justice it deserves.”

Richardson has used a crowdfunding campaign to help finance his last couple of films. The campaign for “Vulassic Park” was called “Pickle Starter,” and the campaign for his next film can be found on spiderwack.com.

Today, he teaches video classes at Riley High School and Saint Mary’s College. The first version of “Vulassic Park” was filmed in 1993 and 1994 when Richardson was a theater student at Indiana University South Bend.

Richardson and his crew have figured out a way to include some of the original “Vulassic Park” in the new one.

“It’s pretty light hearted. There is some adult humor in it, so it’s probably a strong PG,” he said. “There’s no major swearing, so I think PG-13 would be a little extreme. … Anything adult would go over a little kid’s head because there’s not really a lot of swearing in it.”

NILES — The Easter bunny has come early to Niles, leaving a host of orange eggs in its wake. The... read more

Community members step up in a mask shortage stitch

SMC extends online classes through the end of spring semester

First Cass County resident dies as a result of COVID-19