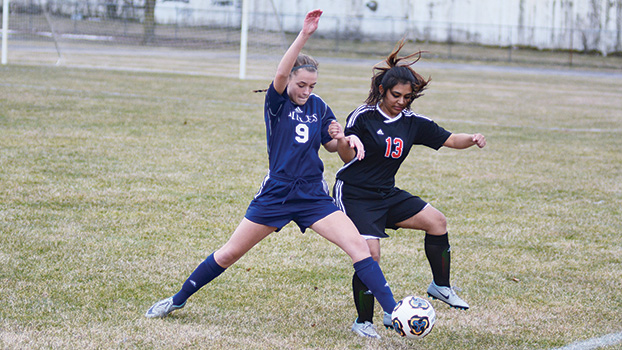 DOWAGIAC — Senior Dayleigh Miller scored a first-half goal, which visiting Niles made stand up, in a 1-0 victory over Dowagiac in non-conference soccer Monday afternoon.

It was the season opener for both teams.

Niles, which finished with 26 shots on goal, made coach Abel Fonseca’s debut a success.

Both coaches were pleased with how their teams played in the first match of the season.

“We have a lot to work on,” Fonseca said. “I am a first-year coach here and the girls are playing different positions. We still have to work on our first touch and the key parts of soccer. We need to keep working on our combination play and keep moving forward.”

“We are very, very resilient,” he said. “We had a ton of freshmen in the game. I thought we did really well against a really good team. We fought all the way to the end. The girls played extremely hard.”

Fonseca liked the way his team attacked the goal all night long.

“We took the opportunity when it came to us,” he said. “It was a good chance. Dayleigh Miller took a good ball from Grace (Florkowski) and attacked it. It was a good combination play.”

For Davis, getting the ball moving faster will be a key moving forward.

“We need to move the ball a little quicker,” he said. “I think we held on to it a little too long at times where we could have made quicker decisions. It was the first game for nine of them, so there is a bit of a learning curve for them.”

The Vikings (1-0) will be back on the road Thursday as they travel to Bridgman for another non-conference match, which is slated to begin at 5 p.m.

Dowagiac is now off until after spring break when it returns to host the Chieftain Invitational beginning at 10 a.m. on April 14.

Classifications unchanged at local schools, Lakeshore moving down to Class B

NILES — The Michigan High School Athletic Association released its classifications for the 2018-19 school year and only Lakeshore and... read more