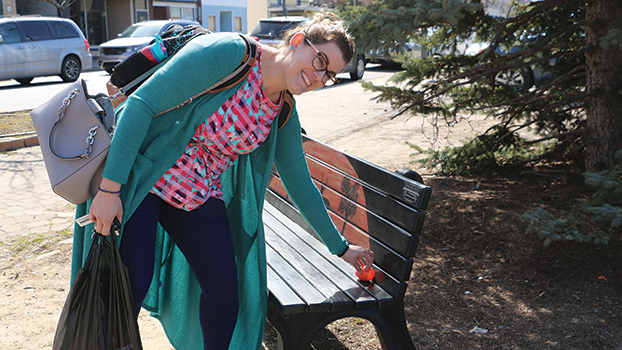 A Relevant Church member hides an Easter egg for a pre-Easter challenge that the church is hosting throughout this week. (Submitted photo)

NILES — The Easter bunny has come early to Niles, leaving a host of orange eggs in its wake. The eggs were hidden by members of Relevant Church throughout downtown Niles and local parks, excluding those damaged in the flood. Residents are reminded to heed park closures caused by flooding.

A second wave of Easter eggs will be hidden Wednesday.

Those lucky enough to find an egg can be entered into a drawing to win an iPad mini from Relevant Church.

To do so, they need to take a selfie with the egg and post it on social media with the hash tag #EasterInNiles. They must also tag two friends.

Those wishing to increase their chances to win can post the selfie on multiple social media accounts. For every account they post on, their name will be entered into a drawing to win. These instructions, along with a ticket to attend Relevant’s Easter service on Sunday, are inside of the egg.

Muta Mwenya, the Relevant Church pastor, said three congregants, Sarah Shirk and husband and wife Rod and Kyla Carneiro came up with the idea while talking about ideas for upcoming Easter events.

What started as a potential hunt for a golden egg snowballed into a scavenger hunt involving the whole city.

“We’ve got a really creative bunch of people that attend,” Mwneya said. “Everything we do, we try to add an element of fun and wit.”

While Mwenya said he does hope that the event helps to get the word out about his church, he also said it was devised as a way to inspire whimsy among people of all ages.

“It’s just something to engage the community,” Mwenya said. “The biggest thing is just to getting people to have fun.”

Already some of the more than 300 eggs hidden throughout Niles have been discovered by passersby.

“It’s like a scavenger hunt for Niles,” Mwenya said. “We wanted to bring people downtown, too. It should be something fun for people to do with their kids.”

When the contest is through Sunday, Mwenya said congregants will sweep through Niles to clean up the eggs.

Coming up with unique ways to engage the community is part of the foundation of the church, Mwenya said.

Relevant Church will host its Easter service at 9:30 a.m. and 11:30 a.m. Sunday. Following the service, children will be able to take part in a glow in the dark Easter egg hunt inside the church. Black lights and glow in the dark eggs, as well as the musical accompaniment of a DJ, will be used to give this tradition a unique twist.

NILES — The smell of fresh popcorn will once again permeate the Front Street corridor, after the Wonderland Cinema, 402... read more