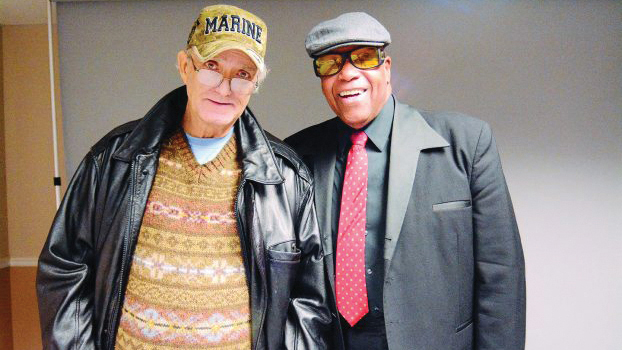 From left, Larry Kilcoyne, a booking agent for Agape Entertainment Group posed next to Billy Shelton — the last of the original The Spaniels Forever singers. (Leader file photo)

The Spaniels Forever to perform at Niles High School May 5

NILES — Though they may have roots in Gary, Indiana — The Spaniels Forever have become part of the Niles community.

In February, the R&B and doo-wop group performed a free Black History Month show for area youth and they often search for a benefit, church or hospital where they can lend their talents.

This spring, the pioneers of doo-wop will return to the Niles community again, this time to perform “A Spring Fling Doo-Wop Thing” at Niles High School.

The concert is open to the public and will take place at 7 p.m. Saturday, May 5, at the high school, located at 1441 Eagle St. The family-friendly performance is being put on by Niles-based Agape Entertainment Group.

Billy Shelton, 84, of Hammond, Indiana, is the last of the original Spaniels to perform with the band. Shelton said he hopes that the music will inspire youth to learn about a classic genre of music.

“We like to keep the ‘old’ music alive,” Shelton said. “There’s a lot of kids that have never heard this music before.”

Special for this performance, the Spaniels Forever will perform an eclectic mix of tunes that aim to be easy to sing along to, such as the “Lion Sings Tonight” by the Tokens, as well as some songs from their Motown days.

Shelton grew up in Gary, Indiana and said he first discovered his love of singing in church, where his father was a pastor. He started singing at the age of 3.

Shelton credits the church for providing roots to a lot of today’s popular music genres.

“Jazz, blues, rock and roll, country, that all came from the church,” Shelton said.

When Shelton would join forces with Pookie Hudson and Calvin Fossett to form the Spaniels in 1948, he would get the chance to croon to more than those in the church pews. The band is perhaps best known for its song “Goodnight, Sweetheart, Goodnight,” which became a hit in the mid-1950s. Since his earlier days singing, Shelton has had the chance to perform all over the world and said he has to only hum a few bars of “Goodnight, Sweetheart, Goodnight” for some to recognize the tune.

The Spaniels would go on to perform for the soundtrack of the movie “American Graffiti.” The band was also inducted into the Rhythm and Blues, and Doo-Wop halls of fame.

Despite the notoriety, Shelton said the band is a bit of a one hit wonder and that few people seem to recognize the band’s name.

But with a few revived notes thrumming through the air for the Spring Fling, Shelton hopes that people recognize that some music remains timeless.

Larry Kilcoyne, a booking agent for Agape Entertainment, said he felt that the event would be yet another way to bring The Spaniels Forever back to the area. And, he said, the high school has ample seating for the show.

For Shelton, what matters is being able to do what he loves and hopefully share the magic of music with others. At 84, the musician does not plan on taking it easy any time soon.  The Spaniels Forever often perform for benefits or simply for the joy of singing.

“It is just as important to sing at a nursing home and school as it is at a casino and sing and make a lot of money,” Shelton said. “Anyone who knows me will tell you that God has given you a gift if you can entertain people and make them happy.”

Tickets for the show are $16 for general admission and $32 for four tickets.