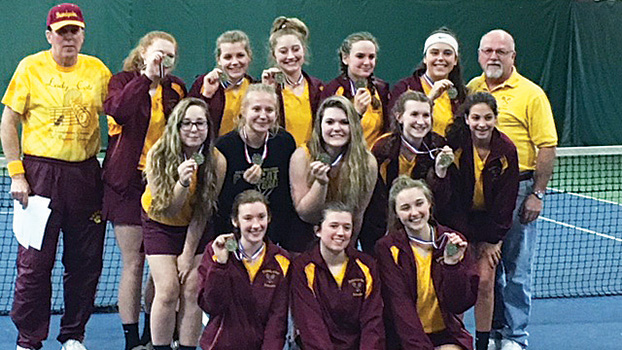 NILES — Host Brandywine won all but one flight in capturing its own indoor invitational at the Lakeland Athletic Club Saturday.

The Bobcats swept the doubles flights and won three out of the four singles flights to amass 22 points.

Comstock was the runner-up with 14 points, while Galesburg-Augusta was third with 11 points.

“Just a great way for us to start our season,” Brandywine coach Joe Marazita said. “Lauren (Srmek) and Oliva (Whitney) did not lose a game all day and Maigon Conrad was outstanding in her singles debut.”

Conrad was the winner at No. 2 singles, while Srmek and Whitney won at No. 2 doubles.

Also winning singles titles for Brandywine were Megan Schmidt and Kimberley Solloway at No. 3 and No. 4 singles.

“Our effort was great at all eight flights and our three new players (Solloway, Stratton and Stanner) adjusted well to the varsity level.”

EAST LANSING — Carlos Johnson knew it was good when it left his hand. His Benton Harbor coaches and teammates... read more