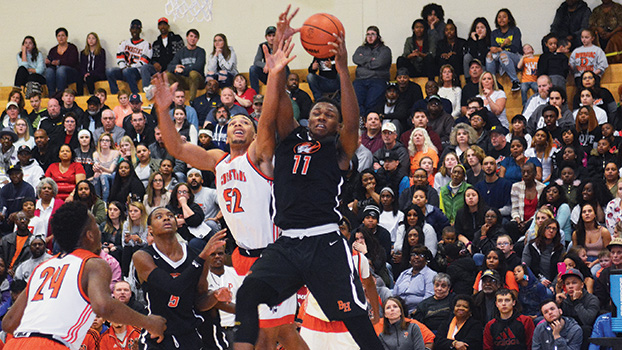 Carlos Johnson (11) and the Benton Harbor Tigers will face River Rouge in the Class B state basketball semifinals at 5:30 p.m. in the Breslin Center on the campus of Michigan State University Friday. The Tigers, who defeated Dowagiac to win the regional championship and Williamston in the quarterfinals on Tuesday, are now 25-1 on the season, are faving a River Rouge (23-1) team that has won more state titles than any other program in Michigan. (Leader photo/SCOTT NOVAK)

EAST LANSING — Class B could feature the most entertaining matchups of this weekend’s Boys Basketball Finals at Michigan State University’s Breslin Center.

From one side of the bracket will emerge a longtime power — Benton Harbor, seeking its first title in more than a half century, or 14-time winner River Rouge.

On the other side, reigning champion New Haven is coming off its first MHSAA title and looking to repeat led by star junior Romeo Weems – who will surely get some time facing Grand Rapids Catholic Central standout Marcus Bingham, Jr., as the latter works to lead his team to its first Finals championship in this sport.

Tickets cost $10 per pair of Semifinals and $10 per two-game Finals session (Class C and Class B). All Semifinals will be streamed live on MHSAA.tv and viewable on a pay-per-view basis. The Class D, A and C championship games will be broadcast live on Fox Sports Detroit, while the Class B Final will be shown on Fox Sports Detroit on a delayed basis at 10:30 p.m. Saturday. All four championship games will be streamed live on FoxSportsDetroit.com and the FOX Sports Go! app. Free radio broadcasts of all weekend games will be available on MHSAANetwork.com.

Here is a glance at the semifinalists. Statistics are through teams’ regional finals.

League finish: Does not play in a league.

Outlook: Benton Harbor was Class B runner-up in 2014 and made the semifinals a year ago, and Johnson and Hopkins starred for last season’s team as well. Senior guard Elijah Baxter (9.7 ppg, 6.7 apg) also started last season. Senior guards Dennie Brown and Devan Nichols both average just above 10 ppg as well, and total six players this winter average at least 8.8. The only loss was to Class A Hazel Park, which finished 18-3.

Outlook: River Rouge is back at the semifinals for the second straight season and after a one-point overtime last time loss kept it from a first championship game berth since 1999. Torrance-Jackson not only is the only starter back from that team, but also the only senior on this one. Toney also saw time off the bench in last season’s semifinal and joins him in the backcourt, while the frontcourt includes two 6-6 post players. The lone loss this winter was to Class D semifinalist Southfield Christian.

EDWARDSBURG — Everyone has a purpose or a calling in life. For some, it’s to be a parent or a... read more