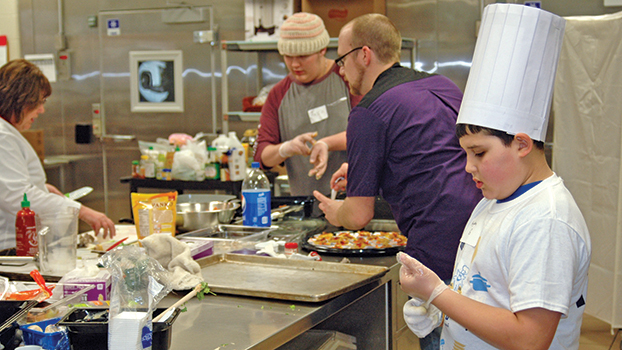 Correction: In a previous version of this article, the names of the Sodexo Future Chefs competition winners were misstated. Eli Stout came in first place, Hayden Groth in second and Emelia Livingston in third.

Moving quickly through the kitchen, the students hurried to get the food they had just spent an hour making onto a plate before an announcement was made telling them that time was up.

This is the fourth year that Dowagiac Union Schools have participated in the program. The theme for this year was “Asian fusion,” so students prepared a number of Asian inspired dishes, including crispy tofu with mango salsa, Asian nachos and Asian-style meatballs.

“It’s been wonderful working in the program,” said Deb Cahill, director of food services. “Kids watch all these shows like ‘Master Chef Jr.,’ and they want to participate in something like that. This is a good way to get them that experience locally.”

“I don’t think I’ll win [the regional competition], but it would be cool if I did,” Stout said.

Stout’s winning dish was a plate of taco egg rolls. He said that he loves to cook and that he often cooks with his mother.

Cahill said she is proud of all the students who participated in the competition and said that they were all winners.

Because the Future Chefs competition does not teach children how to cook, they have to practice cooking on their own time and come up with the concept of their competing dish all on the their own. Cahill said that this takes more work than people realize and that students should be recognized for the hard work they put into the competition.

“The kids get a sense of pride, just because they have accomplished something,” she said. “This is all about showcasing their talents, and we do have a lot of talented kids.”

One of the greatest rewards of the competition, Cahill said, was that it gets children interested in cooking and making their own food.

“I really think that if we get back to cooking from scratch, and by competing, they are learning how to do that,” Cahill said. “They are thinking, ‘what should I be eating on a daily basis and what goes into that?’ I think that really helps kids to make healthy choices.”