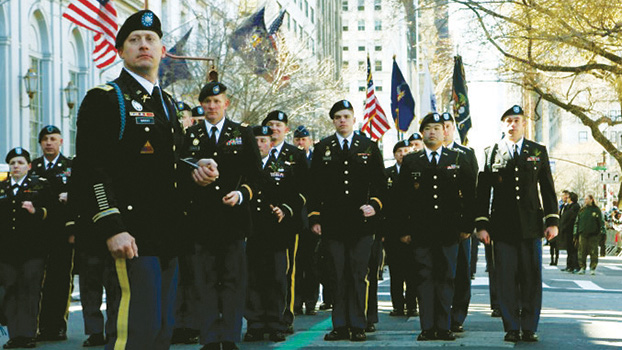 CASSOPOLIS — One of the of the largest human celebrations in the world is the St. Patrick’s Day Parade in New York City, where more than two million people gather along the streets of Manhattan to view a tradition that began in the early 1760s.

For the past two years, the leader of the parade has been a man from Cassopolis.

Lieutenant Colonel Don Makay is the Commander of the Army National Guard, First Battalion, 69th Infantry Regiment in Manhattan, New York and a graduate of Ross Beatty Jr. Sr. High School in 1995. Because of the former, he has the honor of leading his regiment and the entire parade up Fifth Avenue from 44th Street and Fifth to 86th Street.

“It was a fantastic experience,” said Makay, who lead the parade this past Saturday, March 17. “It’s a great opportunity to get in front of soldiers and showcase the entire battalion to the city and, because it was televised, the world. It went very well.”

The 69th Regiment in Manhattan has led the parade since the early 1850s. At first, this was for security purposes, but today it is strictly ceremonial.

“The parade itself is a remarkable piece of history and it’s definitely a reflection of the intrinsic ties between Ireland and the U.S.,” Makay said. “Certainly, millions of immigrants came from Ireland and helped shape and build this country. They came and fought for this country, starting with the Civil War.”

More than 150,000 people participate in the parade every year, which according to Makay, is to recognize Irish heritage and contributions to America. This year, members of the Irish Military marched in it, as well as students and faculty from Catholic schools in the Archdiocese of New York and member of Irish and Catholic organizations.

“Anyone one who reflects the Irish or Catholic culture marches in it,” he said.

Makay begins preparing for the parade about four months prior to the event. He trains his men, makes sure they know what to wear and meets with local Irish and community members to discuss the parade.

Then, of course, there is the day itself.

“It’s a pretty busy week, but the day starts at about 6 o’clock,” he said. “The officer corps, senior leaders of the regiment and the special guests, etc. meet in our headquarters in my office. It’s a very historical building and office, surrounding my thousands of relics from the 170 years that the regiment has been around. We’ll start with a toast of Irish whiskey.”

This year there was also a video screen present so some of the regiment’s soldiers stationed in Ukraine could join in. Next, he and other members of his regiment marched to St. Patrick’s Cathedral for mass at 8 a.m. — a tradition that has taken place for more than 100 years.

After mass, it was time to head to the parade starting point, which commences at 11 a.m.

At the end of the parade, Makay and the entire battalion head to a subway train, which is reserved just for them, and take it to a ceremony where the soldiers will be given recognition for their various achievements.

Finally, they will all head back to their headquarters for a celebration.

Makay says that he will likely lead the parade one more year and then be moved out of command. He was recently accepted to the U.S. Army War College and will soon begin attending the academy to help him progress further in his military career, which started in Cassopolis more than 20 years ago when he became a reserve during his junior year at Ross Beatty Jr. Sr. High School.

“I’ve been in the military since 1994,” he said. “I enlisted in Michigan and then I was a reserve in Indiana for three years. Then, I was active duty for about 14 years. Then, I moved to New York and became a part of the National Guard about four years ago.”

All this time in the military helped prepare him to take on challenges such as lead men in combat, so when it came time to lead a parade in front of millions of people, he was ready for the moment.

“It’s not in my nature to admit something’s overwhelming, but it was an honor certainly to be named [the commander of the regiment],” he said. “I’m a combat officer, so I’m certainly used to planning and doing military things, but this certainly added a whole new level of ceremonial and diplomatic skills that I had to get used to.”

NILES — If constituents did not know much about their seven congressional District 6 candidates before, they got the chance... read more