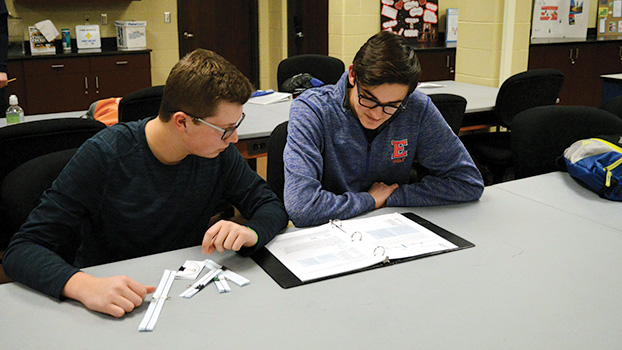 KALAMAZOO — Recently, area students left for Kalamazoo Community College, where they spent the entire day. However, they were not there for a college visit, they were there to compete in a rigorous science contest.

“At this level, they have predetermined events that they will be in on that day and a partner for they will be working with,” said Carey May, coach of both the high school and middle school Science Olympiad teams at Ross Beatty Jr.-Sr. High School. “The junior high competed against 14 other teams and the high school competed against 16 other teams. It’s a very independent day and they go and do these hour-long competitions and then move on to the next one.”

Students at the events are given significant independence, in large part, because their coaches are required to assist with events as judges and coordinators. Additionally, students are spread out at events that take place at the same time.

While this may seem less than ideal, the coaches believe it helps the students to be more autonomous and mature.

“It helps them immensely because there’s not always going to be someone there to help them with their stuff,” May said. “And then if they don’t do well, who do they have to blame? No one really but themselves. They know that so there’s this ownership and then when they do well, they take pride in how they did.”

Both Edwardsburg teams placed high enough in the competition to qualify for state, while May was more than satisfied with how the Cassopolis team performed.

“We only had two partnerships that didn’t place at all with any ribbons or medals, so overall we had a really successful year,” she said. “I was very pleased, considering I didn’t have real high hopes because we didn’t get as much preparation time as we normally do. But then we did a little better than we normally do.”

“Since we came in third we qualified to go to state,” said Judy Frank, one of the Science Olympiad co-coaches at EHS. “State will take place at Michigan State University on April 28.”

Unlike other competitions, only an entire school team can move on to state, not single students or pairs. However, students who do well in competitions still get recognized.

Beyond fostering more independent students, the Olympiad also exposes them to careers directly related to the sciences — from astronomy to anatomy to mechanics and engineering.

This can be especially helpful for students who are considering one of this careers.

��Science Olympiad really allows you to explore a field that you’re interested in,” said Edwardsburg junior Chloe Bartz. “I know personally that I would like to do something possibly with microbiology, so learning all about microorganisms really got me more interested in the field and exposed me to so many different people and opportunities. It’s just very helpful.”

COA hosts presentation about the Titanic

CASSOPOLIS — Visitors to the Cass County Council on Aging were transported Thursday to the decks of the Titanic. With... read more