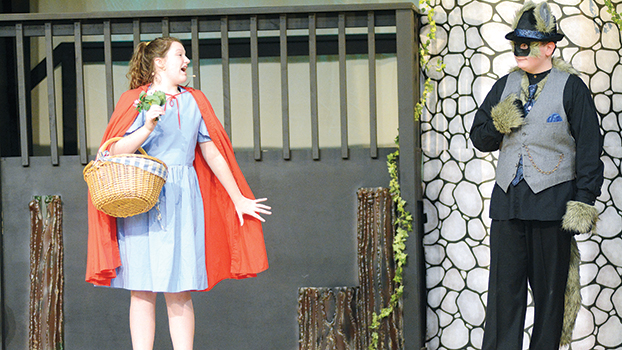 Brandywine Elementary School to perform ‘Into the Woods’

NILES — On a stage in the Brandywine Elementary School, young actors spent their Tuesday evening bringing to life the dozens of enchanting characters from the musical adventure “Into the Woods Jr.”

From a witch with an expertly exercised cackle to the innocent red riding hood skipping through the woods to see her grandmother, the mystical mashup is one director August Garritano said is sure to delight audiences.

“It is going to be a really good show,” Garritano said. “Regardless of which cast they see.”

Students will debut their production of “Into the Woods Jr.” at 7:30 p.m. Thursday night at Brandywine Elementary, 2428 S. 13th St. Additional shows will take place at 7:30 p.m. Friday and 2 p.m. and 7:30 p.m. Saturday. Tickets can be purchased at the door and cost $5. All funds go back into funding the drama department.

There are more than 40 actors starring in the show. Most of the actors are from the Brandywine Junior and Middle High School, with select elementary school students also chosen for some roles. More than one cast was created to put on various shows of the production, though some of the actors were also double cast.

“It is one of our more advanced set designs yet,” Garritano said.

In his tenure as director of the drama program since 2016, Garritano said he seeks to pick productions that both challenge and feature his students’ talents as actors. Garritano also serves as executive director to the PAW, Inc., a summer drama program for youth.

Garritano said he feel like “Into the Woods,” which features 18 songs, is a perfect example of this goal.

“The music is very challenging,” Garritano said. “I wanted to give the students a challenge. It is not a show that is typically done, because it’s so challenging. But the students have really taken this production and made it their own.”

The Tony-award winning musical was produced by Stephen Sondheim and James Lapine and features some well-known fairy tale characters such as Cinderella and Red Riding Hood. In the play, an evil witch played by Alyssa VanLue lusts to have her youthful beauty restored and places a curse on a baker, played by Christian Stout and Billy Gibson and his wife, played by Mackenzie Jones and Kelli Scoggin, rendering them childless. In hopes of reversing the curse, the couple is ordered to go into the woods and find items that the witch is searching for. In their mission, they run into several fairy tale characters who are on a quest of their own.

“The story takes a lot of classic tales and mixes them all together,” Garritano said. “And adds some of its own characters. The wish is not always what they expect. It’s ‘a be careful what you wish for’ kind of tale.”

For Garritano, the play is also a momentous one because he has the opportunity to work with Denise Boger, a choir director who is assisting with the play’s music. Garritano, who is a Brandywine alum, said Boger taught him when he was in school and she helped to inspire his love of the arts.

“It is an honor,” Garritano said. “I feel honored to work with a former teacher, mentor and friend.”

Garritano encouraged the community to come and see the production.

Twelve-year-old Abagail Solloway is one of the actors starring as Red Riding Hood, alongside Abbie Hubbard who plays the role in another cast.

Solloway has played characters in a number of the Brandywine musicals and said she always has fun and learns something different.

“It brings me back because it keeps on getting more fun,” Solloway said. “I think they should come and see the show because it is interesting from beginning to end. [It’s] a cliff hanger and people will want to see what happens next.”

LimeBikes could come to Niles

NILES TOWNSHIP — The bright green bikes that have become a popular mode of transportation and leisure in cities like... read more