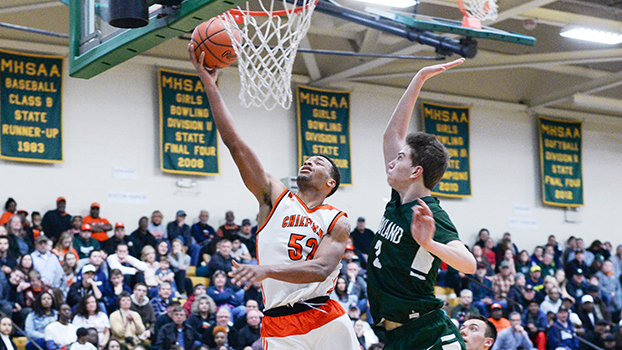 The Chieftains, who finished behind Otsego in the final overall standings, had senior Caleb Murphy named first-team.

“Caleb Murphy has improved a great deal since last season,” said Dowagiac coach Danum Hunt. “His presence on the inside helps to open things up offensively for us. His presence is felt on both the offensive and defensive end of the court. He’s had several games in which his presence allowed us to take off and build bigger leads as well as secure the win. His athleticism allows him to guard any position on the floor.”

“Jadyn Smith is a very good defender,” Hunt said. “Even with him being undersized for his position, he is an excellent rebounder. I call him ‘The ball magnet.’ Wherever the ball is you can rest assured that J.J. is somewhere in the vicinity. He does all of the intangibles. The things that don’t show up in the stat sheet or scorebook are the things that Jayden is willing and happy to do those things. He’s really one of the cogs that make our defensive machine run smoothly and efficiently.”

“Jamin Hunt has become a pretty solid leader for us at the point guard position,” Hunt said. “He’s played out of position for two seasons, but yet we count on him to steer the ship for us offensively. He is the most experienced player and knows the Chieftain system really well. His experience helps to keep us organized and playing at a high level offensively. I’m really going to miss his presence and knowledge on the court.”

Sophomore D.J. Lanier was an honorable mention selection, as was Edwardsburg’s Tre Harvey.

“D.J. Lanier has improved and matured since last season,” Hunt said. “I’m excited about the fact that he has two seasons remaining in the Chieftain program. The best is yet to come for this kid. He is emerging into the Chieftain leader.”

“He is a natural leader,” said Edwardsburg coach Stephen Weight. “He was voted as captain by his teammates, and consistently lived up to it.  Tre always played hard on both ends of the floor.  I am excited that he was recognized by the coaches.”

BERRIEN COUNTY — This weekend and next, children across Niles and Buchanan can scramble to find Easter eggs stuffed with... read more