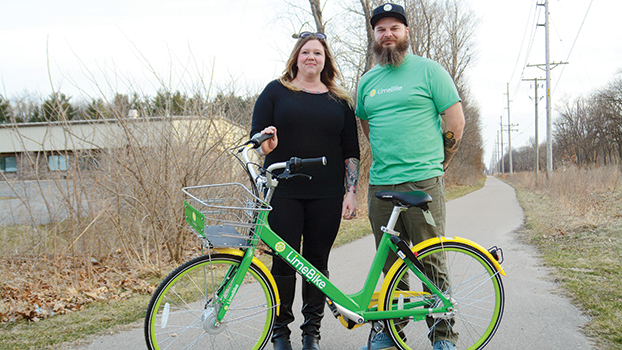 From left, Emily and Nathan Hasse display a LimeBike Monday on part of the Indiana-Michigan River Valley Trail. The couple both work for the company and gave a presentation to trustees during a meeting. (Leader photo/KELSEY HAMMON)

LimeBikes could come to Niles

NILES TOWNSHIP — The bright green bikes that have become a popular mode of transportation and leisure in cities like South Bend might just find their way to riders in Niles Township.

The presentation was prompted by Jill DeLucia, the Niles Township Park Commission chair, who said she could potentially see LimeBikes being used on the Indiana-Michigan River Valley Trail, which is expected to open later this year.

Nathan Hasse, the South Bend operations lead for LimeBike, wheeled in a bright green bicycle to display. Nathan was joined in the presentation by his wife, Emily Hasse, who also works for the company.

Nathan told trustees how the bicycle-sharing program works and talked about features riders can expect to find on each model.

For $1 every 30 minutes, those wishing to hop on a LimeBike download a phone application which allows them to unlock the bike. The bikes are launched in key locations, depending upon the area and are easily recognizable by their bright green colors. Unlike many popular bike rental programs, LimeBikes do not require a dock, which means riders can stop riding whenever they wish.

“It is a very cheap and affordable way to get around,” Nathan said. “LimeBike’s goal is just to solve these first and last mile transportation problems.”

When they are through riding, customers park the bike and push a red lever on the rear tire to lock the bike and complete their usage.

The company is less than a year old and began operations in San Mateo, California in June 2017. The program was implemented in South Bend on July 11, 2017.

Nathan said the program has been popular in South Bend and that initially the city agreed to have only 250 bikes in use, but soon upgraded that quota to 1,200.

However, trustees questioned how LimeBikes would fit in a more rural area like Niles Township.

Trustee Terry Eull said Niles Township does not have many sidewalks or bike lanes, so the trail was the only logical place to ride.

Nathan said while some people use LimeBike for transportation, many others use the bikes for leisure or exercise.

“Even if it is a more rural area, I still think there’s a chance for them getting used,” Nathan said. “It’s not just for getting around. It’s for leisure and fun as well.”

Trustees also mentioned that they already see some discarded LimeBikes in the township and because the Indiana and Michigan communities will soon be joined together through the trail, they are likely to see more of the bikes. Recently, they said a LimeBike had been found outside of Jay’s Lounge on S. 11th Street.

Through GPS tracking, Nathan said company employees can locate the bikes and pick them up within 24 hours of a request to collect it.

Trustee Chris Vella expressed some concerns about liability and asked if anyone had been seriously injured or died while riding the bikes.

Nathan said there had not been any deaths involving LimeBikes and that he was not aware of any bike-related injuries. He also said that when users download the application on their phone, they have to agree to use the bikes responsibly.

Because they are a private company, Nathan said he wanted to emphasize that taxpayers would not pay anything to have the bikes in their town.

“We work with the city, [but] the city and tax payers give us zero dollars,” Nathan said. “We are a private company, but we do make agreements with the entities we work with.”

In cities were the program is approved, the company works with the municipality to create a Memorandum of Understanding. Through the MOU, the company agrees to guidelines about the programs operations in that location.

In the weeks ahead, DeLucia said she will request a MOU from another city that has approved the bicycle-sharing program, to learn how that city addressed certain issues.

Vella said trustees need to do more research before reaching a decision, but that they hope to vote before the trail opens.

For their part, Nathan said if the township approves the program, LimeBike would do research to assure company viability before implementing the program.

Considering what he had heard Monday, Nathan and Emily said they could see the program benefiting Niles Township residents.

“We know LimeBike would work in Niles, because LimeBikes are ending up here already,” Nathan said. “And trips are ending and beginning here. It is just a matter of time before more bikes end up here.”

“It is a perfect opportunity to connect cities,” she said.

One School, One Book program intended to engage youth in reading

NILES — Students at Howard-Ellis Elementary School have recently begun embarking on a new journey with a lovable and adventurous... read more