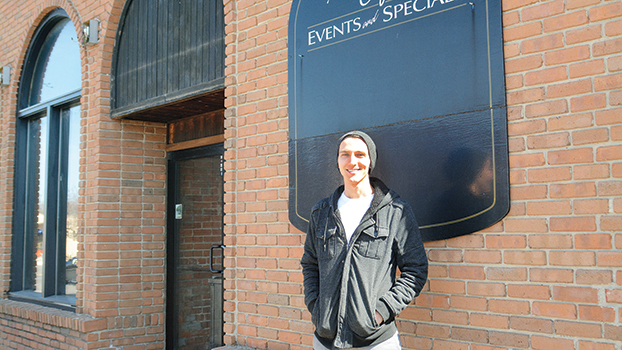 Chance Smith, 22, of Niles, is pictured in front of the former Riverfront Café. Smith will be one of the owners of the soon-to-be restaurant at 219 Front St. (Leader photo/KELSEY HAMMON)

Behind the scenes, former Riverfront Café has been evolving into a new business

NILES — Last Friday, when the purple and white letters were removed from the former Riverfront Café, Chance Smith said he knew that those passing by would begin asking questions about the fate of the once prominent restaurant that closed shop in 2014.

In 2015, the Smith family purchased the building at 219 Front St. and Chance, 22, and his sister Sage Smith, 26, have planned to operate the renovated restaurant together and make the downtown building a hot spot once again.

Behind the scenes, Chance said his family has been working tirelessly to haul out the old furniture, replace equipment and give the restaurant and café a whole new look.

“It’s been a long time coming,” Chance said. “We have been in there day and night. We were not going to change much when we first started renovations, but then this domino effect happened. We have ended up changing more than we could have ever imagined.”

The restaurant and café will feature options for casual dining and a place to enjoy coffee or frozen yogurt. Chance said more details will be revealed when they give some community members a sneak peek next month.

In addition to removing the signage last week, Chance also installed a piece of black metal siding. The outdoor changes are just a few that Chance said the family have been working to complete.

Admiring the work from outside Monday, Chance said he believes the restaurant — the name yet to be revealed — is on track to open between the summer and fall of this year.

Among the new features, Chance said the interior will feature industrial modern design. He said he believes the design face lift will complete the architectural features that the family already admired, including the brick and wood work that has become iconic to those who patronized the business before.

“It is a massive piece of history that has been here for so long, so we know what we have and we are going to try to take the best care of it that we can,” Chance said. “We know this building is huge to Niles.”

Chance is a 2015 graduate of Brandywine High School. Currently, he works as an assistant tennis coach for St. Joseph High School in South Bend.

Sage was homeschooled and studied to be a cosmetologist. She owns and operates her own business, Sage Salon, in downtown Niles.

While Sage will work more behind the scenes to help operate the restaurant, Chance intends to be the face of the business and work with customers on a day to day basis.

In the years that he has lived in the downtown, Chance said he has been proud to see the revitalization of local businesses and proliferation of new store fronts.

Chance was among the customers who visited the Riverfront Café before the business shut its doors. He said his family saw an opportunity to bring that environment back to Niles when the property went up for sale.

“The more we have done to the inside, the more excited we have become [about its potential],” Chance said. “I think this building is the best it has ever been,”

Because renovations are not completely through, Chance said he does not have a full estimate on the cost of repairs. He expects to have more concrete numbers within the next month, but he estimated that the total cost will be in the hundreds of thousands. The family paid for the repairs out of pocket, Chance said.

“The kitchen alone probably took us a year and a half, but we wanted to make sure you could eat off the floor,” Chance said.

In the weeks to come, Chance said progress will continue. He said the family is eager to show the community the new product.

“We want this building to be ours,” Chance said. “That’s why we have been putting our blood, sweat and tears into it.”

BERRIEN COUNTY — This weekend and next, children across Niles and Buchanan can scramble to find Easter eggs stuffed with... read more