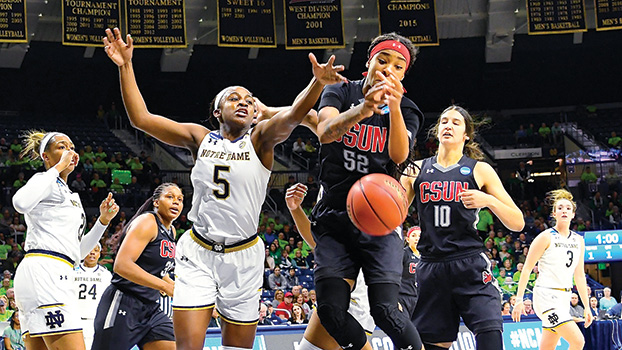 NOTRE DAME — What the Notre Dame women’s basketball team has accomplished this season despite losing several key players to injuries has been amazing.

If the Fighting Irish are going to make a deep NCAA tournament run this year, they will have to keep on amazing people.

Fortunately for Notre Dame, Westbeld injured her other ankle, and not the one that forced her to have surgery in the off season.

The Fighting Irish did not need Westbeld, who has scored more than 1,000 points in her career, as they rolled to a 99-81 victory over the Matadors to advance to the second round where they faced Villanova Sunday night.

During Saturday’s press conference, McGraw updated the status of Westbeld.

“Kat’s going to be a game-time decision,” she said. “The x-ray was negative, so that was good. Just trying to keep the swelling down right now. I think that’s the main emphasis from the training room.”

If Westbeld is unable to play, Notre Dame (30-3) will have to take on a Wildcats team that needed overtime to defeat South Dakota State in the second game of the doubleheader Friday night.

The Wildcats hoisted up 38 3-pointers in the contest, connecting on 16 of them (42 percent).

At the offensive end, Notre Dame played extremely well against Northridge, especially in the second quarter when it outscored the Matadors 22-16 to open up a 55-32 lead.

Notre Dame scored 44 points in the second half while Cal State Northridge scored 49.

“I thought we struggled defensively,” McGraw said. “Everything we talked about trying to stop (Channon) Fluker, and she just went to town on us. I was really disappointed we didn’t play better defensively, but their zone offense was really good.”

Fluker kept the Matadors in the game, especially in the first half.

She finished the game with 25 points and 11 rebounds.

Notre Dame countered with plenty of offense from guards Arike Ogunbowale and Marina Mabrey, along with the inside play of Jessica Shepard.

That trio scored 77 of the Fighting Irish’s 99 points, as well as 19 assists, 17 rebounds and seven steals.

Shepard and Mabrey each had seven assists, while Shepard ha 10 rebounds and Mabry four steals.

“I thought Jessica Shepard for her first NCAA Tournament was phenomenal,” McGraw said. “Double-double and maybe could’ve had a triple-double. Seven assists and no turnovers, so a great stat line. Marina really helped Jess out by hitting some threes, and Arike did her normal great offensive game.”

“There’s nothing that surprises you in what they did,” he said, “but that’s what makes them a really good basketball team. They are really comfortable knowing their strengths and weaknesses individually, and then you put it all together, and they’re really efficient on offense.”

By STEVE KRAH Leader Publications contributor CONSTANTINE — Kalamazoo Christian outscored Cassopolis 27-15 in the second half and 13-4 in... read more