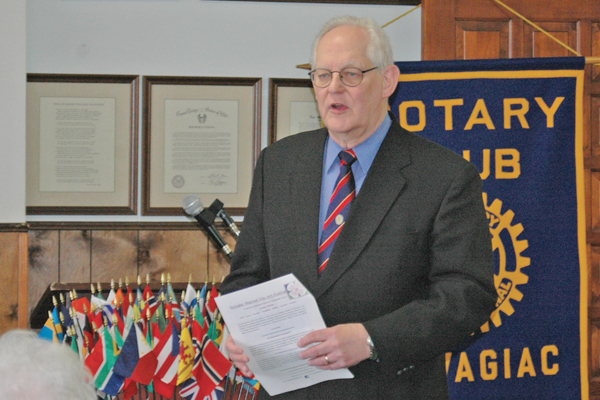 DOWAGIAC — Though piles of snow are lingering on the ground, Dowagiac Rotary members got a taste of spring Thursday through a presentation about one of the city’s most popular festivals.
Members of the Dogwood Fine Arts Festival board visited the Dowagiac Rotary Club during its usual meeting Thursday afternoon. Board members spoke to club members about the festival, what will be featured at this year’s festival and how the festival benefits the Dowagiac community.
The Dogwood festival will run from May 3 to 19, with 2018 serving as the 27th year of the festival. According to the festival’s website, the mission of the festival is to provide fine arts for people of all ages.
“Art and music have been staples of the festival from the beginning,” said Jim Benedix, chair of the Dogwood Fine Arts Festival.
Benedix said that planning has long been underway for the festival. Now, the group is ready to share what they have planned for the spring festival.
“We have a lot of exciting things coming this year,” Benedix said.
The first event of the Dogwood festival this year will be the Starfish Circus, which is returning to the Dogwood Festival after it was hosted in 2016.
The Starfish Circus is an event put on by the Aerial Angels and local children. Interested children train with the Aerial Angels for two weeks before performing a circus at the Dogwood Festival.
“We had to do it again because we had parents coming up to us saying, ‘this changed my kid’s life,’” Benedix said. “We didn’t really expect that. We knew we had to bring it back.”
Mark Herman, vice chair of the Dogwood Festival, said that parents demanded that Starfish Circus be brought back.
“Parents said, ‘I can’t believe what this has done for my kid, and I have other kids, so you are doing this again,’” Herman recalled. “So, we said, ‘OK.’”
Other exciting events at the Dogwood Festival involve well-known authors and singers, Benedix said.
A first this year, the Dogwood Festival will feature a county music act. Sweet Tea Trio, an Alabama-based country music group, will perform at the festival on May 12. The group has toured with Kid Rock, opened for Bon Jovi and performed at the County Music Awards.
Benedix said that even though he is not a huge fan of country music, he enjoyed the Sweet Tea Trio, and he believes others will as well.
“One past member [of the Dogwood board] said it would be a cold day in hell before there was country music at Dogwood,” he said. “Well, it just got chilly here. … We want to keep trying new things.”
Though the festival will feature a country music act, there will be many varied events to cater to many different tastes, Benedix and Herman said.
“The nice thing about Dogwood is we have a lot of events and we try to get into the schools to expose the children to the arts,” Herman said. “Hopefully, we open minds and broaden horizons.”
A full list of events and details for the Dogwood Festival can be found at dogwoodfinearts.org.