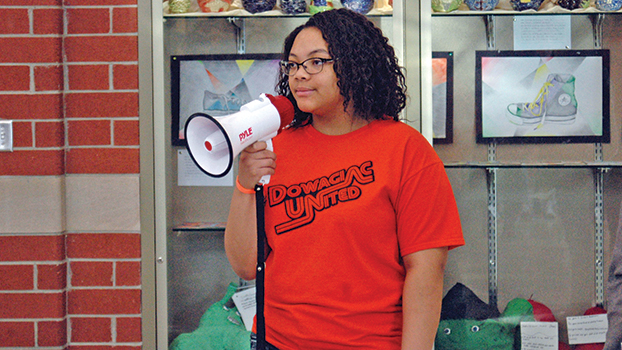 13-year-old Jada Shields addresses the crowd, reading off the names of the 17 victims of the Parkland, Florida shooting. (Leader photo/SARAH CULTON)

Dowagiac students walk out of classrooms in anti-gun violence demonstration

DOWAGIAC — The hallways of Dowagiac Middle School were quiet Wednesday morning save for the for the quiet chatter of four girls as they watched a ticking clock, waiting for the big hand to reach the top of the hour.

As soon as the clock struck 10 a.m., the voice of principal Sean Wightman came over the loudspeaker inviting all interested students to the join the girls in the main hallway of the school.  Within minutes, dozens of students filed into the hallway, their feet so densely packed together that they entirely covered the prominent arrowhead artwork of the flooring.

Crowding together, the students chatted amongst themselves, their voices creating a steady buzz in the air, while principal Wightman stood at the edge of the crowd, ensuring that nothing got out of hand.

The volume continued to increase until one of the original girls, 13-year-old Jada Shields, held a megaphone to her lips to cut through the noise.

“We want to thank you all for joining us today,” Shields’ voice echoed through the megaphone, as she and the three other girls stood before the crowd. “We are here for a cause.”

Shields, along with 14-year-old Chloe Hill, 14-year-old Makala Hill and 12-year-old Tori McNeil, organized a student walkout demonstration during school hours Wednesday in protest of gun violence in schools. Taking place exactly one month after the school shooting in Parkland, Florida that left 17 dead, the Dowagiac Middle School walkout was one of many planned student walkouts across the country. The walkout lasted for 17 minutes, one minute to honor each of the victims of the Parkland shooting.

“The goal of the walkout nationally was to be a call to Congress to pass legislation to keep us safe from gun violence at our schools,” Chloe Hill said. “Locally, we would like to start a conversation about safety among our students. … We shouldn’t be afraid to come to school.”

Though Superintendent Paul Hartsig said the school district was not endorsing the walkouts, he and his team designated areas on school grounds for students to peacefully gather for the demonstration.

Students that participated in the walkouts would not be punished unless they left school property to do so, Hartsig said.

“We just want our kids to be safe,” he said. “People trust us with their kids for a third of the day, so if we can make this safe, we will. But we can’t keep them safe if they leave school property.”

Though school administration chose to neither endorse nor condemn the walkouts, many teachers at Dowagiac Union Schools supported students in their decision to take part in the national movement.

One such teacher was Jodie VandenHeede, a social studies teacher at Dowagiac Middle School who aided students organizing the walkout.

“This is the step number one for students to learn the appropriate way to have a voice … to be assertive, but not aggressive, to be heard, but not insult,” VandenHeede said.  “[I] didn’t do much [organizing]. This was really all the kids. They had strong ideas about what they wanted to say and how they wanted to be heard. I only maybe provided technical support.”

The four girls who organized the walkout at the middle school said they began planning the demonstration immediately after the Parkland shooting took place. Though the girls said they were just trying to start a conversation, they did ask for action among both students and administration, asking for better solution to gun violence prevention and asking everyone in attendance of the demonstration to send a letter to Congress asking for gun legislation.

“We want to get the word out there,” Makala Hill said. “We want to remember that we were students and that we said something and took a stand. We are not going to be just heard in the school. We need change. We want to be safe in our schools and have our education.”

Despite the fact that they are middle school students who have yet to enter the halls of a high school, much less become full-grown adults, the group said that Dowagiac Middle School students have a voice that deserves to be heard.

“For me, it was really about getting students involved,” Shields said. “We wanted everyone to see what happens when you do care. We want people to see that we do want to talk about these issues, and we can make a difference.”

The girls have received a fair amount of criticism online for organizing the walkout, with many people saying that the girls are too young to know what they are talking about or understand the complexity of gun issues and school shootings, according to Latoi Wilson, Shield’s mother.

Not only did the girls say they will not let the criticism get to them, they disagree entirely.

“We are not too young. [Shootings or shooting threats] are happening to kids our age,” Shields said. “We want to let people know that we do care and there is something we can do about this.”

Though the walkout on Wednesday was over quickly, the group of four said that they are not done and that they are hoping to host another demonstration or assembly of some kind before the end of the school year.

“[Gun violence in schools] is still an issue, so we want to keep letting people know about it,” Makala Hill said. “We have a voice. We want to use it.”

Buchanan High School students walk out amidst concern for safety