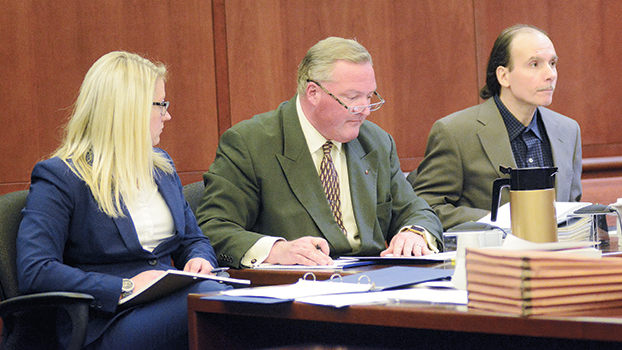 NILES — Handcuffed but clad in a suit, James Parker Huffman faced the beginning of his jury trial Tuesday at the Berrien County Courthouse in Niles.

Huffman has been charged with first-degree murder, following the death of Angela Cluver — his girlfriend of 12 years. The prosection alleges that Huffman strangled Cluver to death on July 21, 2017, at their home on 996 S. 14th St. in Niles. Huffman confessed the crime to police July 24 and has told investigators that Cluver’s death was part of a suicide pact, according to court testimony heard Tuesday.

Huffman has pleaded not guilty to the charge.

Through Friday, 14 jurors and Judge Charles LaSata will hear testimony from more than 20 witnesses on the case. To begin, they heard opening statements from assistant prosecutor Cortney O’Malley and defense attorney Jennifer Fields, who will represent Huffman alongside defense attorney Scott Sanford.

O’Malley told the jurors that Cluver had endured “a real-life horror story.” Before her death, O’Malley said Cluver had been working at Modineer and living with Huffman and their cat Lela.

“She had problems throughout her life like anyone — medical, financial, family — she had problems,” O’Malley said. “But on July 21 of 2017, the defendant decided that her life was no longer worth living. He decided she should die because of her problems.”

O’Malley said Cluver had died a violent death. She described how Huffman was alleged to have kneeled over Cluver on the bed in their home and strangled her for about five minutes, until a loud pop of bone indicated that Cluver was deceased.

Cluver’s body remained covered with a blanket in the laundry room on top of a piece of cardboard, decomposing for three days, until Huffman confessed his crime to the police.  O’Malley said Huffman had plotted to dump her body in a river. Cluver’s body was found with duct tape wound around her ankles, knees, hands and her mouth, face and eyes.

The assistant prosecutor described graphically the state Cluver’s body was in when found — so decomposed that fingerprints were necessary to identify the victim.

In regards to the couple forming a suicide pact — O’Malley said there was no note or evidence from Cluver to corroborate his story. O’Malley also argued that Huffman had planned Cluver’s death and even considered other options for her killing. She dismissed Huffman’s allegations of a suicide pact and insinuated that it was a story woven for the benefit of making himself look better. O’Malley asked the jurors to find Huffman guilty as charged.

But Fields told jurors during her opening statement that Huffman was not “a cold-blooded killer” and instead argued that Huffman had assisted in Cluver’s death to alleviate her of ongoing issues.

Fields described the problems that had burdened Cluver and Huffman in the weeks leading up to her death. She said the couple had been facing financial issues stemming from Huffman’s unemployment and a leave of absence from work that Cluver had taken. Fields said disability checks to the couple had been delayed. As a result of their financial struggles, Cluver and Huffman had their utilities shut off and were visiting food pantries to get groceries. Other difficult issues continued to surface, including the discovery that one of Cluver’s children had a terminal illness and that she could not afford more pain medication for a painful back issue, caused by a car accident.

“This was not first-degree murder,” Fields said. “It was not about hate. It was about love. With the world coming down around them, Angela wanted to die. James loved Angela very much and he cared for her deeply.”

For his part, Fields said Huffman had just been rejected for a job position after an interview and that he was battling some health issues himself, including recovering from a bout of pneumonia.

Following Cluver’s death, Fields said Huffman tried in a number of ways to kill himself, but was unsuccessful.

Fields argued that Huffman should not be charged with first-degree murder.

“This was a tragedy, but this was what Angela wanted,” Fields said.

Jurors heard from four different witnesses Tuesday, including Cluver’s daughter Rachael Burnette, who had spoken with her mother just five hours before her death. Through tears, Burnette told the jurors she and Cluver had talked happily. She said her mother was ecstatic because Burnette was getting married and had just regained custody of her children. They had begun planning for her wedding and Cluver was eager to visit Burnette and help her pick out a dress.

Burnette said her mother’s life had not been an easy one and her happy mood was somewhat unprecedented.

Trial proceedings will resume at 8:30 a.m. Wednesday and more testimony from various witnesses is expected.

NILES — In what is expected to be an action-packed evening, Niles High School will host a live wrestling tournament... read more