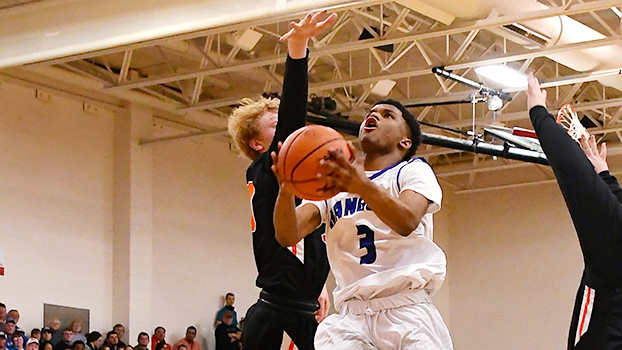 Rangers hold off Homer in semifinals

CONSTANTINE — Despite a flat performance, the Cassopolis boys basketball team advanced to the Class C regional championship game with a 68-64 win over Homer Monday night.

The Rangers (24-0) were able to take control late in the game and then held on to advance to the title game against a familiar foe in Kalamazoo Christian.

“We were lethargic and I do not know why,” Cassopolis coach Ricky Evans said. “We just did not have the energy that we usually play with. We just have go to play with it Wednesday.”

Taking advantage of an off shooting night for the Rangers, Homer (13-10) was able to keep within striking distance for most of the first three quarters.

Cassopolis started taking control of the game midway through the third quarter and took a 42-35 lead into the final eight minutes.

From there, junior guard Tyrese Hunt-Thompson took over for the Rangers.

Hunt-Thompson scored eight of his game-high 23 points in the final quarter and the Rangers, despite trouble shooting from the field, were red-hot from the free throw line.

Cassopolis made 6-of-10 free throws in the fourth quarter and 10-of-15 in the second half.

In the fourth quarter, Cassopolis was able to stretch its five-point advantage at the end of the third into a 63-52 advantage, the biggest lead of the game, before Homer made a late comeback attempt.

Jordan Sherman helped keep Homer in the game in the fourth quarter with nine of his 11 points, but the Rangers were able to hold off the charge at the free throw line.

Besides Hunt-Thompson, Walter Lee, a sophomore, gave Cassopolis a lift off the bench.

Lee scored seven of his nine points in the fourth quarter.

COLOMA — It was as close to a perfect defensive game as any team can get. Never allowing its opponent... read more