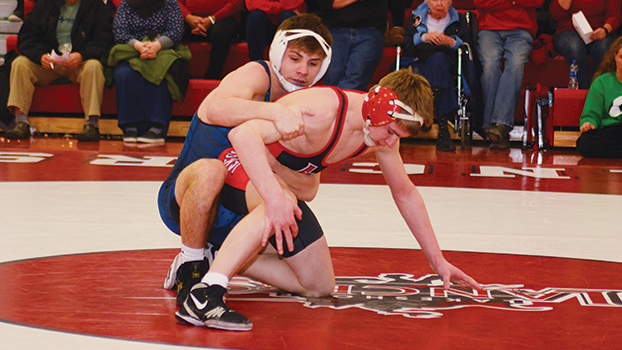 Niles senior Austin Franco has been named the Frank Mucha Wrestler of the Year by the southwest Michigan coaches. (Leader photo/File)

Franco named wrestlers of the year

NILES — Senior Austin Franco of Niles, who captured the 119-pound Division 2 state championship earlier this month, has been named the Frank Mucha Wrestler of the Year.

Franco was selected by the southwest Michigan coaches, who gather to select the All-Southwest Wrestling team.

Franco was also the first-team selection at 119 pounds.

“Austin was voted wrestler of the year over two other state champions, said Niles coach Todd Hesson. “His overall body of work throughout his career was a major factor. I like the fact that it gives all the kids a chance to be recognized.”

Dowagiac’s Colin Burandt was named Coach of the Year after leading the Chieftains to the Division 3 state quarterfinals.

Franco was the lone Niles wrestler to earn first-team honors.

In all, the Vikings dominated the squad with 15 selections.

Edwardsburg had a pair of first-team selections in Jackson Hoover at 130 pounds and Nick Bradley at 145 pounds.

Wrestler of the Year Award

A pair of Dowagiac competitive cheerleaders have earned All-Wolverine Conference honors. The Chieftains’ Makaela Castaneda was a second-team selection, while... read more