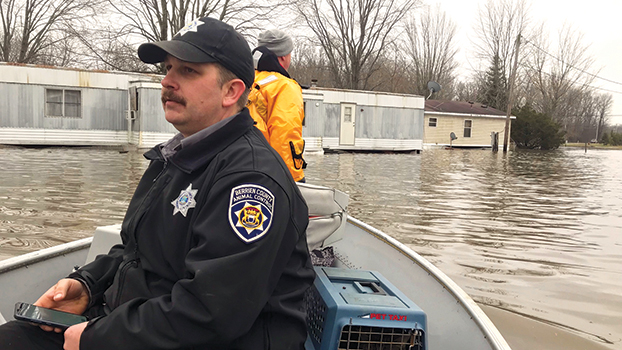 BERRIEN COUNTY — Trapped in the quickly rising waters during last month’s flood, a single horse stranded inside a barn on Linden Drive in Royalton Township stood in chest deep water for two days before help could reach the stranded animal.

The owners of the property were at a loss as to how to get to the horse. But fortunately, the Berrien County Animal Control and coast guard were there to lend a hand, rescuing the horse and bringing it safely to a shelter, where food and warm blankets were in abundance.

The horse was one of more than 60 animals rescued during the flood and brought to a shelter. While it was a trying time for officials involved, Berrien County Animal Control Director Tiffany Peterson said she was awed by the work animal control officers, their partnerships with local authorities and the community of Berrien County.

“We all worked together and all hands were on deck,” Peterson said. “I was so impressed by the community support. I really wanted to give a big thank you to the community.”

As the rain continuously pelted southwest Michigan last month, Peterson and her team began preparing with the Emergency Operations Center to help the county’s residents and animals that would soon be trapped by rising flood waters if they did not act fast.

Partnering with the county’s authorities, Peterson said teams were deployed across Berrien County with the mission of warning people to evacuate and bringing the area’s pets to a safe, dry location.

In River Springs Estates Parks and Shamrock Park in Berrien Township, animal control officers waded through rising waters to bang on doors, ordering people to evacuate and offering to take pets to a safe shelter. They even entered some homes where no one was present, but pets were clearly trapped. Peterson said two of her officers even grabbed their own kayaks and set out to the hardest hit neighborhoods to rescue pets.

“I’m so proud of my team,” Peterson said. “You don’t even know. They worked great and busted their butts to work 10- to 12-hour days and no one complained.”

There was no room for the pets at the Berrien County Animal Shelter in Benton Harbor, so officials temporarily opened Berrien County’s former animal shelter on Huckleberry Road in Berrien Springs. The shelter building had been closed but has remained operational and had working electricity, water and heat.

Peterson said they gave extra hours to about five additional part-time workers to help run the shelter in Berrien Springs.

The animals rescued were mostly cats and dogs, a few Guinea pigs, the horse and one roaming pig that officers were able to capture.

As the animals began to fill the shelter space so too did donations from the Berrien County community. Peterson said food, blankets, litter, dishes, towels and a number of other items were donated.

Additionally, seven Berrien County restaurants hosted a Give Back Night for Our Furry Friends event to raise proceeds for the shelter. So far, Peterson said she has received about $800 from The Mark III. The other restaurants are expected to make their contributions in the days to come.

Pets were kept at the shelter until residents were able to work out their living situation and could care for them again. As of Monday morning, Peterson said less than a dozen pets have yet to be reclaimed.

Peterson said many residents expressed gratitude to the animal shelter for rescuing their pets.

BJ Gardner, of Berrien Springs, was reunited with her eight cats after they were rescued from River Springs Estates.

Gardner was so moved by the rescue that she wrote a letter to Peterson.

“Thank you so much. They are my family and so very important to me,” Gardner stated. “And your kindness and calm understanding made it possible for me to relax and corral the wildest ones safely so they could be transported to safety.”

Peterson herself had helped to rescue Gardner’s cats, two of which had become petrified and were hiding under the bed.

Through the experience, Peterson said she felt Berrien County residents learned a lot more about what the animal shelter does.

“People that would never come in here visit the shelter now,” Peterson said. “I have tried to get out what we do and how much we want to do for the public and they appreciate that. … I have such a good crew. I could not be happier where I am at.”