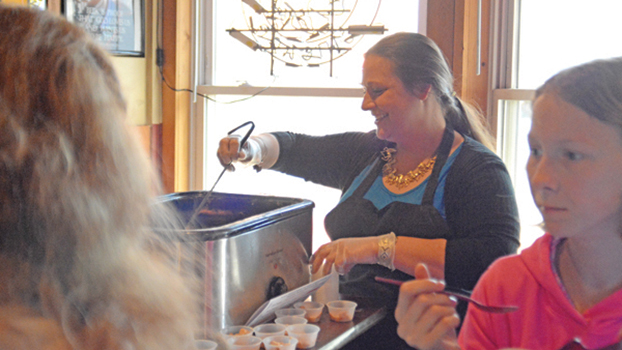 BUCHANAN — There is no right way to make a batch of chili, but competitors in the 12th annual Chili Cook-Off will argue that there is a best way to create the comfort food.

This year, local businesses will once again square off at the Buchanan Chili Cook-Off and vie for awards in the categories of taste, best named chili and people’s choice.

The cook-off will take place from 4 to 7 p.m. Wednesday, March 21, in downtown Buchanan and feature more than 20 different varieties of chili prepared by business owners. Those looking to sample this year’s recipes can start at the Buchanan District Library, where they will receive a map of competitors and get a spoon, which costs $2.

The event is hosted by the Buchanan Chamber of Commerce. Chamber member Kristin Baker said it is an inexpensive way to feed the family.

“People are always shocked that it is only $2,” Baker said. “And people always leave full.”

Baker works for Buchanan Meadows, an assisted living community and co-sponsor for the Chili Cook-Off.

An awards ceremony will follow the competition at approximately 7:30 p.m. at Lehman’s Farmhouse.

This year, proceeds from the event will go to the Buchanan Parks and Recreation Department.

“It is a great cause to be able to give back to the community,” Baker said. “The parks department has some great youth programs.”

In addition to featuring people’s culinary talents, Baker said the event is a great way to showcase Buchanan’s downtown businesses.

“It gets people in and out of your business,” Baker said. “That is a huge benefit right there. A chance to see what is going on in the community.”

A panel of three judges have been selected to taste test each chili entered into the contest. This year’s judges will include radio talk show host Matt Malone and Berrien County Sheriff Paul Bailey. The third judge has yet to be selected.

Residents will also get to cast their own votes for the People’s Choice award. Those who demonstrate the most spirit will also receive an award. Judges will decide the winner of the Taste award.

Baker encouraged those looking to support local business to participate. Front Street is shut down so that families can safely wander between store fronts to sample chili. Once they have gotten their fill, they can cast their ballots for their favorite chili.

Baker said seeing local businesses get into the competitive spirit is part of what makes the competition enjoyable. Some of the businesses will dress in costume or help to draw attention to their storefront with dancers or music.

Seeing the creativity put into each recipe and name is also a fun part of the tradition, Baker said. From dessert chili to savory chili and everything in between, residents are likely to encounter a recipe they had never tasted before.

Last year, between 800 to 900 people attended the event and this year, Baker said they expect the same participation.

To register, businesses can visit buchanan.mi.us and click on Chili Cook-Off. Registration cost is $20 and includes cups to serve chili in. The deadline is March 16. For more info: buchanan.mi.us.