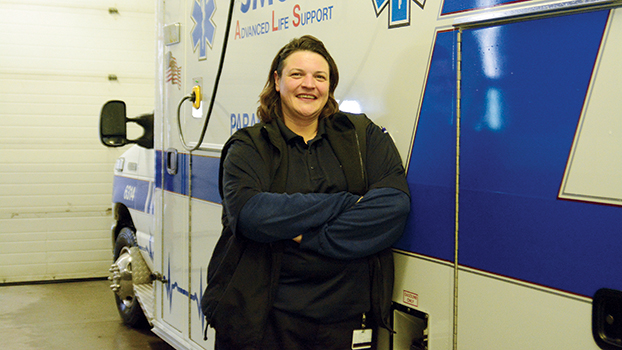 EMT Laura Hooker, of Bridgman, leans against a SMCAS ambulance after working a shift. Hooker was selected as the 2018 Star of Life Award winner. (Leader photo/KELSEY HAMMON)

NILES — Fresh off a 24-hour shift, SMCAS medic Laura Hooker was armed with a steaming mug of coffee Thursday morning. Despite a particularly busy end to the lengthy shift, Hooker still had a pep to her step that those who know her will say is more personality than caffeine.

Hooker’s charisma despite an exhausting work day is just one of the reasons she was nominated for the 2018 Stars of Life Award, which is distributed by the American Ambulance Association to recognize ambulance professionals across the nation who go above and beyond their duty to save lives.

Since becoming part of the SMCAS team six months ago, Hooker has done more than help to save lives. She has also streamlined the inventory process for supply closets, taken the lead as the medical trainer for Lake Township Fire and worked tirelessly with the community as public relations representative to educate youth about the work of ambulance personnel, to name just a few.

Hooker said she does not know who nominated her, but when she found out she had received the award about two weeks ago, she was honored.

“To know that someone acknowledged all the work and everything I have put into being here so far and dedication to my job has been really humbling,” Hooker said.

As part of the award, Hooker will receive a medal recognizing her efforts and she will also get the chance to go to Washington, D.C. from June 11 to June 13, where she will be honored at an awards banquet, alongside the three other Star of Life award winners who were selected. Hooker will also get a chance to speak with Congress to share her thoughts, concerns and ideas for improving American ambulance care.

Hooker said advocating for better ambulance employee safety will be a top priority.

“Universally, I think there should be common laws for EMS workers,” Hooker said, “concerning, safety and pay and trying to get more young people interested in career.”

Hooker became interested in the career herself while growing up in Flint, Michigan. She said she was inspired while watching the show “Emergency.” It was a passion she carried into adulthood. She went on to study to be an EMT at Great Lakes EMS and graduated in April of 2010. For the past seven years, Hooker has worked as an emergency medical technician. She began her career in Berrien County while working for Medic 1 in Benton Harbor.

Reflecting on her career since then, Hooker said receiving the award is one of her proudest accomplishments — but being honored is not what fuels her passion for the job.

“Of course I like helping people, but it is a job that is different every day, the adrenaline and the satisfaction, even holding someone’s hand,” Hooker said. “You can’t do this job without wanting to help people.”

As an EMT, Hooker might drive the ambulance or be in the back helping a patient. In some scenarios, Hooker will have to make a split second life-saving decision.

“You have got to multi-task,” Hooker said. “My partner could be needing five things done and I have to multi-task, ‘OK which is the priority for this person’s problem?’”

Another major component to the job is showing compassion to a person who may be injured or traumatized.

“You show up at people’s most vulnerable moments and their worst moments,” Hooker said. “You have to make them feel as comfortable as possible, despite them in their worst. That’s huge. A lot of people just need a hand holding and to be told ‘it is going to be OK.’”

Hooker’s sense of humor is also a big part of her personality and ability to calm those at the scene. When a patient is comfortable, Hooker might try out a few jokes on them and she almost always gets a smile.

“I believe in the healing power of humor,” Hooker said. “I found that it gets received very well.”

Letters and phone calls thanking her for her kindness during a tough time are not uncommon for Hooker to receive.

While no ambulance personnel or first responder can ever know quite what to expect as they rush to a scene, Hooker said she takes comfort in knowing that she is not alone. Hooker thanked not just her team at SMCAS, but other authorities, who, like her, are rushing toward danger or tragedy.

“Niles city first responders are a huge help. Sometimes the Niles Fire Department gets there first because of their location and they will hold down the fort and do anything you ask,” Hooker said. “They are smart and great to work with, I can’t say enough good things about Niles City Fire. You never have a super big emergency.”

When she takes to the stage in the nation’s capital this summer, Hooker said it will be those who have stood by her side in the field that she will have in mind.

“We work with so many great people it should have been one of all of us nominated,” Hooker said. “I am definitely accepting this on behalf of the entire company and team. I firmly believe I work with some of the best EMTs in Berrien County.”

NILES — Toastmasters International, a club that seeks to build confidence in speaking and leadership, has instituted a new program... read more