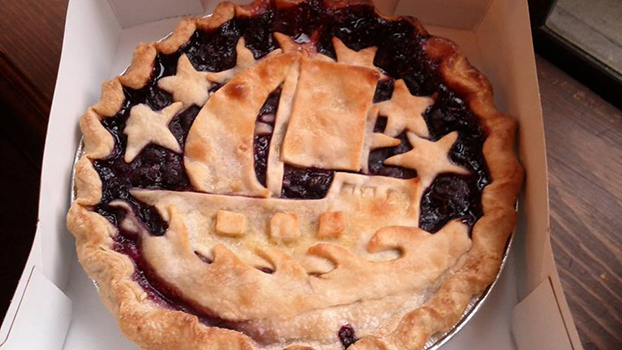 Creativity is a big part of Deanna and Chris’ business. Here, a pie features the artistic rendering of a pirate ship and sky full of stars. (Submitted photo)

NILES — Blueberry, apple, peach, coffee cream, strawberry peach lemonade, Michigan cherry — these are just a few of many options of pies whipped up by Excalibur Bakery that will be offered to customers in the name of Pi Day, which is celebrated on March 14.

Deanna and Chris Briggs, of Buchanan, co-own Excalibur Bakery. The couple said they wanted to offer a sweet way for people to celebrate the holiday.

“We are bringing back a lot of our most beloved pie recipes that we sell over the summer,” Deanna said. “We just thought it would be fun to bring that out for it. Pretty simple — a pie for Pi Day. It’s a fun and creative way to celebrate. It’s always fun to do something a little outside of the box.”

Customers can place their pie orders through 8 p.m. Monday, March 12, by contacting Excalibur through its Facebook page, email: Excaliburbakery@gmail.com or via phone at (269) 340-0771. Pies can be arranged to be picked up at the Niles Entrepreneurial Culinary Inubator, 219 N. Fourth St. the evening of March 13 or afternoon and evening of March 14. Fruit pies are $15 each and real cream pies, which are made with real whipped cream, cost $16.75.

A full list of pies available for Pi Day is listed on the Excalibur Facebook page at facebook.com/pg/ExcaliburBakery. Customers are also encouraged to suggest a pie that they want to purchase.

Each pie is baked from scratch, featuring a butter crust. Fruit pies are created from one pound of fruit and the custard filling in their pies is made from scratch. The couple’s creative mark can also be seen in their unique designs on the pies, from carefully constructed dough flowers to a pirate ship carved into the top of the pie.

The couple encouraged people to celebrate March 14 with a treat.

“There’s never a bad reason to have pie,” Deanna said.

Creativity and a passion for crafting something signature has long been an inspiration for Deanna and Chris. Both grew up in homes that loved baking and cooking from scratch, so much so that Deanna likes to joke about the moment Chris discovered there was such thing as pre-made pancake mix.

For Chris and Deanna, cooking was more than creating something tasty.

“[I liked] the way it brings everybody together and the memories you make around food,” Deanna said.

Before opening Excalibur, Deanna worked as a massage therapist and Chris a personal trainer. When times got tough during the Recession, the couple decided to return to their roots and start their own business featuring their love for baking.

Both took their passion for cooking and honed their skills by earning degrees at Lake Michigan College in culinary management.

The couple has run the business for the past three years from an incubator kitchen in downtown Niles. They offer catering services for special events and can be found peddling sweet treats from a booth at the local farmers markets or Third Thursdays in Niles downtown. In addition to pies, they sell bread, pastries and other baked goods.

In the next couple of months, the couple is hoping to open their own storefront in downtown Niles. They have begun leasing a space at 206 E. Main, but they are working to raise money for equipment and building renovations before they can officially open. Their Go Fund Me can be found at gofundme.com/excaliburbakery.

In addition to pie, customers can also purchase bread, pastries and a number of other baked goods.