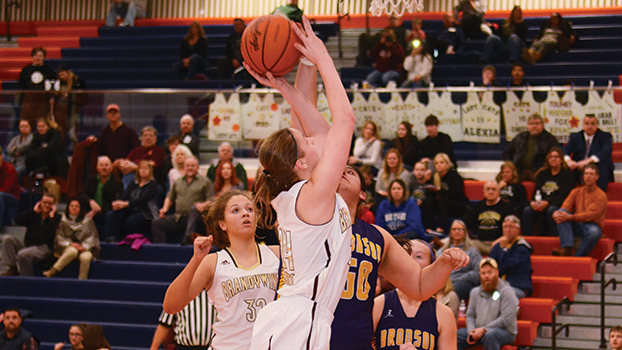 Nicole Sachman (right) goes up for two of her game-high 16 points as the Bobcats defeated Bronson 36-33 in the Class C regional semifinals Tuesday. (Leader photo/SCOTT NOVAK)

Brandywine gets revenge against Bronson

BRIDGMAN — What a difference a year makes.

The Brandywine girls basketball team avenged a loss to Bronson with a 36-33 win over the Vikings in the Class C regional semifinals at Bridgman Tuesday night.

The Bobcats (22-2) advance to play No. 5-ranked undefeated Schoolcraft (24-0) in the championship game at 7 p.m. Thursday. It will be the seventh regional title game for Brandywine in the last nine years.

In Brandywine’s regional semifinal loss to Bronson (17-7) at Homer last March, the Bobcats were just 4-of-48 from the field.

Brandywine improved on that mark in the opening 16 minutes of play as it shot 5-of-24 from the floor. The Bobcats finished the night shooting just 10-of-38 from the field for just 27 percent. Brandywine was only 12-of-25 from the foul line, but made enough down the stretch to hold on for the victory.

“This win was sweet redemption from last year,” said Brandywine coach Josh Hood. “It was a long ride home after scoring just 22 points against them a year ago.”

The Bobcats trailed the Vikings 21-17 at halftime. Hood said his team made a few adjustments, including turning up the pressure on its defense.

“We grew up a little bit and our press turned it around for us in the second half,” he said. “We got into our Black (press) a little bit. The message at halftime was we are not even into our pressure stuff. ‘Girls, what separates us from the rest of southwest Michigan? The Black pressure. That has been our calling card for nine years and that is what has got us a championship every season.’ The girls got a couple of steals and smelled blood in the water. They started smiling and didn’t worry about missed shots.”

That press turned a 28-19 Bronson lead with 3:33 to play in the third quarter into a 30-28 lead for the Bobcats heading into the final eight minutes of play.

“She is a 5-foot-7 post player, but what she brings without size is her ability to penetrate,” Hood said. “We got some insulation and attacked the girl (guarding her) on the front foot. We got some great passes and finally got into our (offensive patterns).”

The veteran Brandywine coach said his team was fortunate to beat a good Bronson team and advance to the regional title game. Hood also said they are not going to back down from undefeated Schoolcraft.

“We’re glad to be playing Thursday,” he said. “But I made it real clear to the girls that nobody remembers the regional runner-up. We’re not going to just be content to show up. We’re going to come to play.”

Sachman finished the night with a game-high 16 points to go along with eight rebounds.

College to host free event as part of One Story program