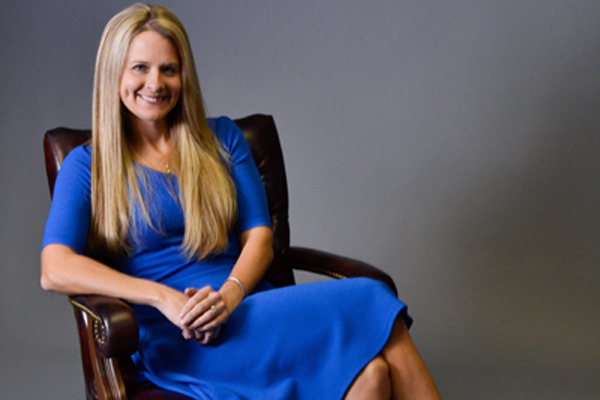 Stacey Carlin is always hustin’.
Outside of co-hosting a podcast, “Hustlin’ in Heels,” she serves as the brand manager for Honor credit Union, and as secretery for the Buchanan Chamber of Commerce. As if that were not enough, she is the mastermind behind creating a service-oriented volunteer group called The Link.
As she has learned while balancing this chaotic schedule, good ideas do not always wait for an opportune moment.
This is why the Buchanan woman carries a red notebook with her at all times. While sipping her first cup of coffee or waiting to pick up two of her three children at school, the notebook is always nearby, waiting to capture a fleeting idea. The book’s cover is peppered with pink sticky notes, which also harbor Carlin’s latest thoughts.
But Carlin does more than jot down the thoughts that inspire her. She is also the brains behind executing them.
On an average day in the spring of 2017 when Carlin was at a friend’s house and simultaneously keeping an eye on her children in the backyard, Carlin and her friends started discussing ways to get young adults more involved in their communities. While today’s service organizations target a variety of local causes, Carlin wanted a fresh approach.

In fact, Carlin felt like the Berrien County area already had so many worthy organizations and causes that needed to be “linked” with volunteers. Carlin started formulating the design of a fresh organization that could serve as a bridge between charities and volunteers ready to serve.
Subsequently titled “The Link,” Carlin brought the group into reality last year, with the intent of targeting the younger generation as its participants.
“We felt like there was this need to step up and become the next generation of leaders, and see what we could do to improve upon what is already going on,” Carlin said.  “We didn’t want to reinvent the wheel, since there are already so many amazing service organizations.”
The Link’s inception began in August 2017, with about 50 participating members. But others soon became inspired by Carlin’s vision and by November 2017, The Link’s participants had already doubled to 100 members.
While serving multiple causes was one aim, Carlin hoped to spur an organization where people could not make the excuse, “I just do not have time to give back.”
Instead of coming to regular meetings, Link members can sign up to do as little as one project per year or as much as a project each week, depending on what they have time for. Newsletter updates detail volunteer opportunities and upcoming projects. The information is distributed to group members via email and posted on Facebook.
Another aspect of The Link is helping people network. While projects and volunteer opportunities are limited to the Buchanan area, anyone of any community is encouraged to either volunteer or forge partnerships with the group. Regular “Link Ups” are also scheduled and involve visiting a local business for food, drinks and networking opportunities. Such opportunities also remind the younger generation about the importance of connecting with someone face to face, Carlin said.
While a growing number of participants seem to suggest The Link’s success, Carlin said all the group has accomplished in its short time indicates that something is working. Because the group is not dedicated to any one particular cause, participants are free to bring new ideas for projects to the table.
For example, in October 2017, Carlin said Link participants heard that Redbud Area Ministries Food Pantry was nearly depleted of donations. After thinking on it for a bit, Carlin called Harding’s Supermarkets and asked if The Link could put a bin for food collection at the front of the store. Customers could then buy one of the needed goods while making their regular shopping run and donate it before they left the store.
The idea worked.
Throughout the month, the bin collected more than 700 items of food, enough to help re-stock the food pantry’s shelves. Now, The Link plans to set up a donation box every October to help collect donations during RAM’s dry stretch.
There have been many other projects on The Link’s agenda targeted at bettering the Buchanan community, including working with the Buchanan-Galien Lions Club, the Blue Star Mothers, the annual Make a Difference Day, and the Little Bucks Book Mobile, among many others.
“We are seeing where the need is and providing the answer,” Carlin said. “We are providing simple solutions and relying on the love people have for our community.”
She thanked her best friends for serving on the executive board, and helping bring her ideas to fruition.
“When you have a great team that can work toward a common goal, the possibilities are endless,” Carlin said.
Carlin also credits growing up in Buchanan and its community that inspired her. Her dad, Paul Dodson II, was one such person, who was a dedicated youth sports coach. As a coach, Carlin said she saw her dad put people into situations where they would excel. By connecting people to their community, Carlin said The Link has a similar model.
In the classroom, Carlin said she was inspired by multiple teachers, but one in particular comes to mind: Ruth Writer, a social studies teacher with the mantra, “Democracy is not a spectator sport.’”
“If you want good things to happen, you have to step up and provide solutions,” Carlin said. “They showed us how to do it and we are just picking up the torch from them and trying to pass it to our kids.”
Already, Carlin has inspired her own children: Cy, 9, Katala, 7 and Kaliana, 2, to embrace this spirit.
Her children started a campaign to bring carbon monoxide awareness to the community and raised $3,500 to buy 350 carbon monoxide detectors for families in need. The family has dealt with carbon monoxide poisoning personally. There was a leak in their home, and they did not want families to have to go through the incident like they had.
Carlin encouraged members of the Michiana community to become inspired by this calling and step up to help, whether by joining The Link or finding another cause to aid their community.
“If everybody in our community did just one thing, imagine what we could accomplish,” Carlin said.

Dowagiac’s Jordan Anderson is a problem solver. Just like a scientist working to develop a new chemical or a doctor... read more