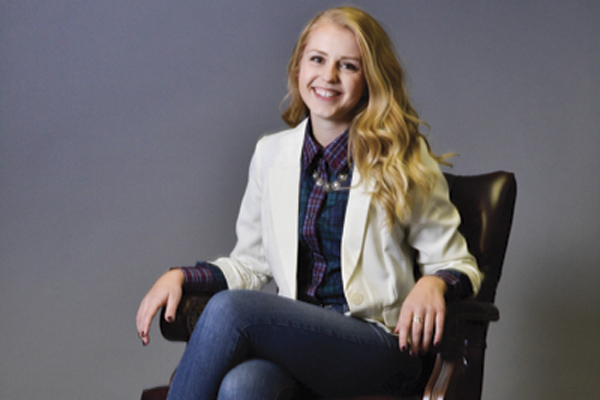 The sun beamed in from a window to her right as Edwardsburg resident Jennifer Mackling’s laptop dinged with another email, the third in the space of minutes.
“Sorry about that,” she apologized, pressing down hard on the volume key to silence the distraction. “That happens a lot. Seems like there is always something to take care of.”
Like most young people in their early 20s, Mackling enjoys being active, going to concerts and spending time with her family. However, at just 24 years of age, she is running one of Edwardsburg’s largest nonprofit organizations, which drives her hectic schedule.
In 2015, Mackling took on the role of executive director of the Edwardsburg Sports Complex, a nonprofit aimed toward providing the Michiana community with sporting fields, playgrounds and other community spaces.

Since taking on the role at 22, Mackling said she has been navigating what it means to have such a prominent role in the community at such a young age.
“It’s kind of crazy, a little bit,” she said. “I never really expected this all to happen so soon.”
Mackling’s story starts out in a way familiar to many millennials. Once she graduated from high school, she left the state and got a degree in recreation, parks and leisure studies from the University of Minnesota.
While she enjoyed her time in Minneapolis, Mackling said that her mind was always in Edwardsburg, where she was born and raised.
“When I went to Minnesota and I was going through my parks classes and my sports management classes, my gears were always going toward what I was going to do in Edwardsburg and what would fit in Edwardsburg,” she said, “It always came back to what was going to happen here.”
Because of this, after graduation, Mackling made her way back to her hometown, which is when she was approached by Ed and Patty Patzer, who founded the ESC in 2005, about the executive director position at the nonprofit.
“We thought she was a great fit, because she was an Edwardsburg person with a lot of interest in seeing the complex be successful,” said Ed, who serves as president of the ESC. “It was important to us to find someone with a vested interest in the complex, and we believe we found that in [Mackling].”
Having been involved with the ESC since she was in middle school creating PowerPoint presentations for the complex, Mackling gladly accepted the position, calling it her “dream job.”
As executive director, Mackling wears many hats. Any given day of work can include marketing the complex, reaching out to sponsors, working in sports management or even some construction work.
“My days can be pretty random, I think, being the only staff person here,” Mackling said of her position. “I love the marketing stuff, but I also do some pretty weird stuff like dealing with the grass and construction. It’s a highly multi-faceted job.”
Despite the stress of the constant change from day to day, Mackling said she enjoys the hustle and bustle of the ESC, and works to educate herself on the parts of the job she is not as familiar with, going as far as to earn nonprofit leadership certification from the University of Notre Dame.
“I don’t know how I would do in a role where I didn’t get to do something different every day,” she said. “If there’s a day that my brain just isn’t working, I can’t sit still or I can’t focus at the computer, there is plenty to do outside. I can always go do something else.”
One of the many duties Mackling takes on as executive director is working closely with the Edwardsburg Chamber of Commerce, and serving as the face of the ESC to the Michiana community and contractors with the complex. This is something that she said she can find intimidating.
“Sometimes, if I’m trying to make a business phone call, I sound like I’m 15 years old, and I don’t really look that much older in real life,” Mackling said. “There can be a credibility issue with that and being a woman in the sports and the turf grass and construction industries. There is a challenge.”
Despite this, Mackling said that in her position, she has learned to stand up for herself, and that she has been blessed with a chamber and other local officials who stand behind her.
“She has a strong personality. She’s dealing with outside organizations and is conveying to them the goals of the sports complex, so she needs a strong personality,” Ed said. “She’s doing a great job. Jennifer brings a young perspective to us, which is the group we are trying to attract. We find her input very valuable.”
Calling herself a “pot stirrer” in the village of Edwardsburg, Mackling said she is excited to use her unique position as a young person in a position of influence to inject her hometown with new ideas and energy.
“The need for new energy in small towns is so high,” she said. “I definitely stir everything up at the chamber, but they were excited about it, and I feel like people are ready for some new energy.”
With the support of the Patzers and the Edwardsburg community, Mackling said she plans to stay put and continue to help the ESC — and the community — grow.
“Growing up, I found myself frustrated that so many of my peers wanted to get out so badly, like Edwardsburg was so awful,” she said. “But I think this is a great place to live. I’m always going to try to make it better, and so long as my family is here, I don’t really see myself leaving.”

While she is still working her way toward earning a degree in nursing, Southwestern Michigan College student Christina Lai has... read more