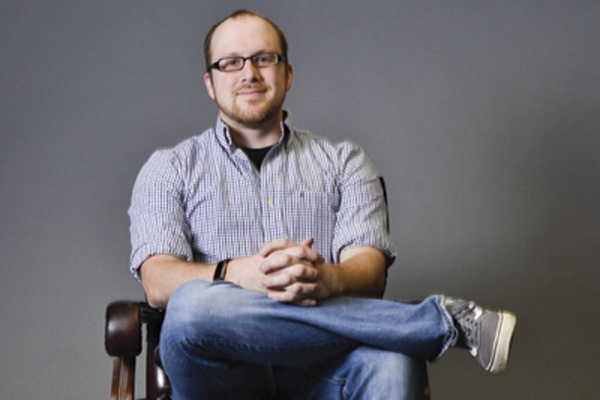 Dowagiac’s Jordan Anderson is a problem solver.
Just like a scientist working to develop a new chemical or a doctor looking to diagnose an unknown disease, Anderson has a uniform — a dark green apron, in his case. He has his laboratory, located in the heart of downtown, and he has his own set of equipment — only he prefers mixers and pastry bags over beakers and microscopes.
Inside the kitchen of his business, The Baker’s Rhapsody, Anderson is always on the case, attempting to crack the latest dilemma that comes across his countertop. These dilemmas include how to recreate the flavor of cocktails in coffee form (without getting customers sloshed in the process), or how to come up with a series of dishes that encapsulates the spirit of perhaps America’s most underappreciated holiday, Festivus (of “Seinfeld” fame).

“My favorite thing is the next thing,” Anderson said, when asked what his favorite item to bake was. “I like figuring out new things, and how they work and why they work. When I work something out to the point where we feel like we have it on lock, I pass that on to someone else and I move onto the next thing.”
It has been that same sense of adventurousness that led Anderson to become a baker in the first place. This would later drive him to share his passion for confection and community by opening his small-town bakery.
Born in Independence, Missouri, Anderson moved around the Midwest as a young child due to his father’s career, with the family eventually moving to South Haven in Michigan when he was in middle school. Although he had helped his grandmother and mother in the kitchen when he was a child, Anderson said that his passion growing up was in the performing arts, such as choir and theater.
After graduating from South Haven High School in 2005, Anderson attended Central Michigan University to study music theater, he said. It was college where his passion for food and cooking was ignited, as he started helping his roommate cook meals at their apartment — if for no other reason than a home-cooked meal was leagues better than anything being served at the school cafeteria, he said.
Anderson soon developed a great love of cooking, and began buying as many cookbooks as he could get his hands on, while binge watching shows on the Food Network. For him, the plate was another canvas which he could use to express himself, just like he had been doing through singing and acting.
“[Cooking] was a change of pace,” he said. “It was unlike anything I had been doing in school, or in work or anything like that.”
Although he finished up his dual majors in music theater and music at CMU in 2010, Anderson knew even before he finished that his destiny awaited him behind the stove, not atop the stage.
When his boyfriend at the time took a job in Arizona shortly after his graduation, Anderson decided to move with him south. While there, he began attending a culinary class at Phoenix College, where he was first introduced to baking pastries.
Anderson was initially skeptical that someone with an imagination as vivid as his could find the rigid formulas and strict baking times and temperatures that cakes, rolls and pastries require (he described baking as like classical piano, while cooking as like jazz). However, he soon fell in love with baking, a passion that deepened when he began working at a cake shop.
“As you get to know the science and the rules of baking, there can be just as much as [creativity as cooking],” Anderson said. “Yeah, you need precision and you need to follow ‘XYZ’ rules to make sure everything comes out the way you want them to come out, but once you know what you’re doing, and you keep the essential pieces so that your muffin is still a muffin, you can play with different flavors and different designs.”
As he rose through the ranks at the cake shop, though, Anderson realized that, instead of following his own dreams, he was just helping another person reach theirs. With that in mind, he decided in 2013 to move to Dowagiac — where his father serves as city manager — and open a bakery of his own.
After returning to Michigan, Anderson started his own company, The Baker’s Rhapsody, where he baked cakes, cupcakes and other sweets using a commercial kitchen in Marcellus, while at the same time working as a line chef at several local restaurants. If that was not enough, he, with the assistance of his parents, began looking for place to open a bakery of his own — a small, relaxing place where people can grab a muffin or cinnamon roll and a cup of coffee and relax.
“I wanted to have it be a place that feels very comfortable and cozy, somewhere where people would want to come, sit down and hang out,” Anderson said.
In spring 2015, he landed a storefront on Front Street, and worked alongside his mother and father to make it happen, while still juggling his other professional duties. After a lot of long, exhausting days, Anderson finally was ready to take his business out of the oven, opening the doors to The Baker’s Rhapsody storefront in December 2015.
The business was a smash hit from the moment it opened, with Anderson nearly running out of his initial batch of baked goods his first day, he said. It has remained a regular destination for many in the Dowagiac area, not just for Anderson’s selection of cupcakes, cookies and breads but for its selection of different specialty coffees as well, including lattes, espressos, cappuccinos and mochas.
More than two years after opening the business, Anderson remains as passionate about his craft and his community as ever.
“It’s so much fun, and it’s different,” he said. “You think you would fall into routines and stuff like that, but it has not been boring, that’s for sure.”