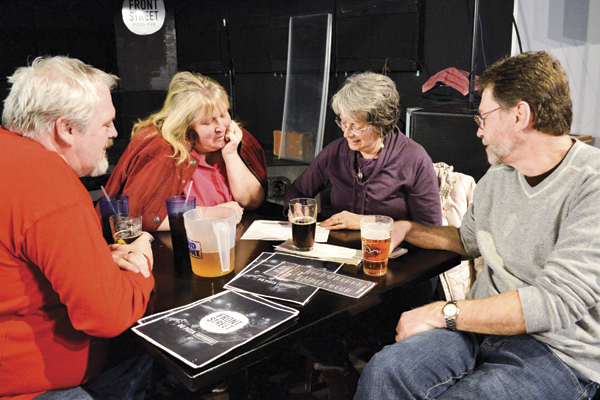 On a Tuesday night at Front Street Pizza Pub in Niles, a group, calling themselves Na/tah/ka, gathered closer together at a high-top table in order to hear each other over the sounds of a crowded bar.
“OK, so this is about the nightclub shooting last year,” said Niles resident Clarissa Lolmaugh, reiterating a question projected on a screen on the far wall of the bar, asking the name of Florida nightclub that saw a shooting in 2016.
“Anyone know the answer?” asked another group member, shrugging his shoulders.
“It’s Pulse,” Lolmaugh answered after a pause. “I’m pretty sure the answer is Pulse.”
The rest of the patrons at the table nodded in agreement, before writing their answer on a slip of paper and handing it in to the announcer in the back of the bar.
After the group has relaxed for a few moments, the announcer comes over the sound system to reveal that Pulse was indeed the correct answer to the question.
“I knew it,” Lolmaugh exclaimed, as the rest of her team let out a cheer. “That’s five points for us.”
This all is just part of the Tuesday routine for people of Na/tah/ka, meaning “the land of many lakes,”  as the group is a regular at Front Street Pizza Pub’s weekly trivia night.

“We just come and hang out and drink some beers,” Lolmaugh said. “This is something that we really like to do and try to make it a priority.”
Lolmaugh is not the only one who feels this way. Trivia nights have experienced a surge in popularity over the past year in the Michiana region with regular weekly trivia nights taking place at many restaurants and bars, including Joey Armadillo’s, the Brass Eye and Jay’s Lounge in Niles, at Sister Lakes Brewing Company in Dowagiac, and at Lehman’s Farmhouse in Buchanan.
The reason for the increase is twofold, according to the business leaders who host these trivia nights.
The first is that a trivia night is a fun event to provide for the people living in their community. The second, and more important reason, is that it brings in business.
Sarah Martin, 29, is the manager of Front Street Pizza Pub. She said that Front Street began hosting trivia nights every Tuesday in the summer of 2017, when the restaurant was looking to bring in more business on weeknights.
“On weekends, we are always packed and geared toward just adults,” Martin said. “So, we wanted something family friendly to bring people in during the week to have fun, and eat and have a drink.”
Originally, Front Street’s trivia nights were meant to only run through the summer, but the weekly event proved successful enough to continue year-round. Though Martin cannot attribute a specific figure to how much trivia playing patrons have contributed to Front Street’s earnings, she did say that trivia night brings in steady business that has grown since it started.
“Trivia is great for everyone because it’s not just the most educated people who will win,” she said. “It takes a diverse team to have a bit of knowledge about everything. So, everyone can be included, which is what I think makes it popular.”
Trivia is not only a money maker for the businesses that host trivia nights.
Deb Millin, of Niles, owns and runs media/DJ business Millinova with her husband Brent. Together, the two produce and announce the trivia games at Front Street.
She said that, though running trivia games is a gig for her, it is also something she enjoys.
“I really like interacting with the community and quizzing people and trying to stump them,” she said. “I also really like learning from the questions we put together.”
Millin said that she takes time to craft a game with a variety of questions that range in subject matter and difficulty level. Sometimes she will take questions from current events she sees in the news, from a trending topic or even information from grade school tests that people have not thought about in their adulthood.
“Throughout the week, I tend to keep my eyes and ears peeled for anything I think could be turned into a trivia question,” Millin said. “I’m always Googling random facts and doing research to frame things into questions.”
Like Martin, Millin said that trivia is something that anyone can enjoy because it is not geared toward any one area of knowledge or experience.
“We ask questions about anything and everything, so a good team has people with different areas of knowledge — maybe a sports guy and then also a person in a specialized field,” Millin said. “That’s what makes the game fun and interesting … and keeps them coming back.”
For the people who play trivia, business is not the objective of the game. Instead, players are just looking to relax, have fun with friends and stretch their minds, according to Angelika Anderson, who plays as the team Smart Cookies Tuesdays at Front Street.
As she often competes alone, Anderson said she has to challenge herself to learn about a variety of different topics in order to be successful at the game.
“I like feeling smart when I get it right. That’s the vain answer for why I like trivia,” Anderson said. “But I also like learning. I always learn something new when I come.”
Lolmaugh’s team, Na/tah/ka, agreed, adding that the game offers them a rush of low-stakes competition that helps them ease their minds and destress from the day.
Often, their competitiveness is rewarded, as on the night of their interview, the team walked away with a first-place ranking in the trivia competition, and as a result, a $30 gift card from Front Street Pizza Pub.
“You might not know every answer, but you are always learning things and having a good time,” Lolmaugh said. “You are drinking, learning and maybe making some money. It’s not a bad way to spend a Tuesday night.”