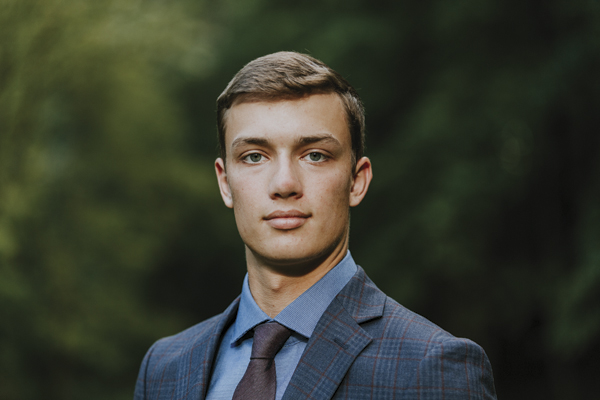 More often than not in the summer of 2015, Alec Janowski could be found at Champs Field in Howard Township, coating a tractor with a layer of dust as he hauled equipment, cleared weeds and spread dirt.
Originally built by Muhammad Ali when his son, Asaad, was school-aged, Champs Field is the home field for many baseball teams, including Janowski’s Old School Baseball team. Over time, though, heavy use and weather wore on the facility.
“The infield was really hard, so every time [players] would slide to base, they would bloody their legs up, or their bats would bounce,” Janowski said. “I just thought I could do something about it.”
So, instead of spending his summer at the beach or hanging out at home watching Netflix, the teenager set out to improve the field he had spent so much time on as a baseball player. Janowski led a remodel team, rallying others to help as he cleared overgrown baselines, spread more than 80 tons of dirt and cleaned up the park.
“I spent half my summer hauling stuff around,” Janowski said, adding, as if it was no big deal, “I probably put in about 500 hours that summer.”
When not catching baseballs or volunteering his time, Janowski often stays in motion, shredding snow on his snowboard in the winter or tearing through dirt tracks on his four-wheeler in the summer.
When his muscles are not racing, his mind is.
A National Merit Scholar, AP Scholar and soon-to-be valedictorian of Niles High School’s Class of 2018, Janowski has the brains to back up his brawn.
Janowski will graduate with credits from Lake Michigan College, in addition to knowledge obtained during several advanced placement classes through Andrews University’s Math and Science Center and other online advanced placement classes offered at Niles.
While he is undecided on where he will study, Janowski knows he will study artificial intelligence, mastering a love for computer science he has honed throughout his high school years.
Blending his love for athletics with his passion for technology, Janowski and longtime friend Timothe Smith have developed a phone app that will serve as a tournament developer. The app handles scheduling, facility booking, official recruiting and payment from one vendor to another, among other tasks.
“This is an actual app for sports — designed specifically for youth sports,” Janowski said. “We’re trying basically to become the way people schedule tournaments.”
Janowski and Smith, a senior at the University of Iowa, have already garnered basic funding and designed the website for the app, and intend to fully roll out the program in summer 2018.
“Once we get the app rolling, we’ll be getting some financial investors.”
TourneyLink.com sports a Kelly green logo with black letters, and the slogan “Maximum Gameplay. Minimum Cost.” Janowski, the CEO and founder, and Smith, the CTO, promise to “revolutionize tournaments one event at a time.”
While Janowski does not plan to play organized sports in college, he intends to stay true to his roots, drawing on his experience on the field and his aptitude for technology to help others organize tournaments for an affordable price.
The Niles High School senior says he is not the typical athlete, or the typical tech-geek, but a blend of both. After being homeschooled for three years, he said the biggest challenge he faced in his education thus far was finding a way to fit in.
Eventually, though, he realized there was no better way to build relationships than to be himself.
“I just tried to find good guys that share the same values as me,” Janowski said. “There are a lot of baseball guys that I’ve been kind to and helped with their studies. That’s a great way to build relationships — just being kind.”

Standing center stage at the high school talent show his junior year, Justin Lyle steps up to the microphone and... read more