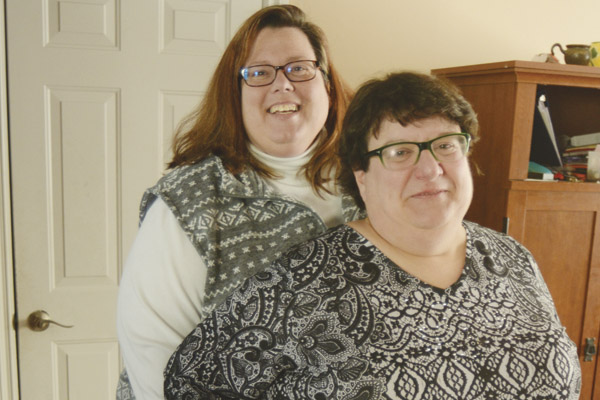 Same-sex couple shares what it is like to raise family in St. Joseph

Fourteen-year-old George Weber is used to people asking questions about his family.
As the second child of two same-sex parents, people often express curiosity. His peers have asked him things like: “Were you born in a test tube?”
His 17-year-old sister Catherine has heard similar inquiries, such as: “Why do you have two moms?” “Does this mean you’re gay, too?” “Who’s the real mom?”
Sometimes George and Catherine answer, trying to educate those who don’t understand. Other times, it gets to be too exhausting.

On a typical Friday afternoon, the family gathers in the living room of their home in St. Joseph. In the crockpot, buffalo chicken chili is cooking and will be done in time for dinner. George has returned from school and Catherine has finished her online course work.
Ann has finished a day’s work as a tax accountant at Whirlpool. Marci, who works as a stay-at-home-mom, has seen to the daily duties of car pools, errands and her volunteer work and takes a seat on the couch. Somewhere in their house, the family pet, a socially reclusive cat, hides in the shadows. It’s a portrait of family that likely is not too distant from others winding down before the weekend. But while the Weber family sees their lives and relationships as normal, they have often had to fight hard to convey this to others.
When the Supreme Court ruled 5-4 June 26, 2015, to legalize gay marriage across the country, many felt great strides in equality for lesbian and gay people had been achieved. People cheered in the streets and the White House façade was lit up in rainbow colored lights to commemorate the historic occasion. But as anyone knows, perception cannot be changed overnight.
For many same-sex families, daily life still includes thinking outside of the heterosexual box: will my family be safe in this neighborhood? What types of questions will my children endure from their peers? How do you ignore people that condemn you to hell because of your sexual orientation?
For the Webers, these are the only abnormalities that they identify in an otherwise “normal” life. These are the things that set them apart, but nevertheless motivate them to strive to educate others, while also showing their support of lesbian, gay, bisexual, and transgender people in the Berrien County area.

A love story
Marci and Ann first met in Rochester, New York. They had both signed up to join the same women’s community choir and Ann took notice of Marci right away.
“She had just moved to town,” Ann recalled of their first encounter. “I thought she was beautiful — she thought I was batshit crazy.”
This did not seem to deter Marci, who agreed to go out with Ann one night and the couple hit it off. When their relationship became serious, the couple did what most do and started thinking about their future together: they talked about marriage, children, where they would live.
On the horizon they saw a promising future, so they arranged for a civil union in 1996, because at the time they could not legally be married.
Family and friends gathered in a park outside of Rochester for the occasion, which, while not with much fanfare, was exactly what the couple wanted.
Then came their two children — a part of their family history that often gets the most scrutiny.
“We did what any other normal couple that has fertility issues would do,” Marci said. “We shopped for genes.”
They agreed that Ann would carry the baby. After enduring the psychology visits, obtaining  references and passing home visits that come with what is deemed an adoption process for fertility treatment, they were able to bring their daughter Catherine into the world, followed by George, who was born two weeks shy of Catherine’s third birthday.
In 2012, the year after New York legalized gay marriage, the couple got married before the justice of peace at the Rochester Courthouse. The wedding was more of a formality than anything — a chance to assure that all legal securities were in place so that their children were rightfully documented as both of theirs. Topping their wedding cake was an ivory colored glass heart that now rests on top of a wooden cabinet, presiding over the family living room.

Leaving everything behind
When the family car broke down on Church Street in St. Joseph, Ann picked up her phone, but did not know who to call. With family more than 500 miles away, she felt very alone for the first time.
“Leaving the safety net behind was probably the hardest thing,” Ann said.
Most families who move to a new area will question the safety of their neighborhood. They might ask their realtor or landlord about the crime rates or break in statistics. They might inquire about the schools and distance to the supermarket. But can you ask your realtor if your neighbors are likely to be judgmental about your sexual orientation?
Ann did not ask her realtor, but she did ask her boss at Whirlpool during a job interview.
“We wanted a place where we would feel safe,” Ann said. “We had to ask those questions. I had to be upfront in my interview and ask, ‘Is this a place I want to bring my family or not?’”
Marci recalled visiting the area and searching for any signs of a pride community. When she saw the rainbow flag indicative of pride support on a brochure advocating for a pride concert, she said she felt relief that the family would once again find a support network outside of family and friends in New York.
As any set of parents will do, Marci and Ann sought to find the best schooling for their children. George has high functioning autism and loves music. They wanted to find a place where he would be challenged academically, but also have a good social environment. For Catherine, they wanted to find a place where she could pursue her passion for Irish dancing. Both are now enrolled in a school that fits these needs. George is a ninth-grader at St. Joseph High School and Catherine takes online courses through Michigan Connections Academy. She continues to pursue her passion for dance at a school in Kalamazoo.
Educating others on their family is also a frequent occurrence. Most paperwork from doctor’s offices to schools requires a listing of children’s mother and father, to which, Marci and Ann have to cross it out and write “first” and “second parent.”
“We have had to do some educating, because it is a different language to some people,” Marci said. “Sometimes they just are not aware that mother and father figures are ingrained into
everything we have.”
Marci has been dedicated to that education and to helping lesbian, gay, bisexual, and transgender persons have access to the same support network that gave her relief when she was new to the area. Marci now serves as the vice chair to the OutCenter where she helps to oversee the board.
Through her work, Marci still sees discrimination, including youth who come out to their families and are subsequently kicked out. But changing a cultural perception is not something done overnight.
In the near future, the family hopes to see a world where if people hate someone it has everything to do with their personality and not their sexual orientation. Until then, they will just keep working to show that their family is similar to that of their peers and co-workers.

Siblings take a leap into the music industry

Buried behind a maze of leaf blowers, tables and cars in a Niles home’s garage stands a makeshift stage, mostly... read more