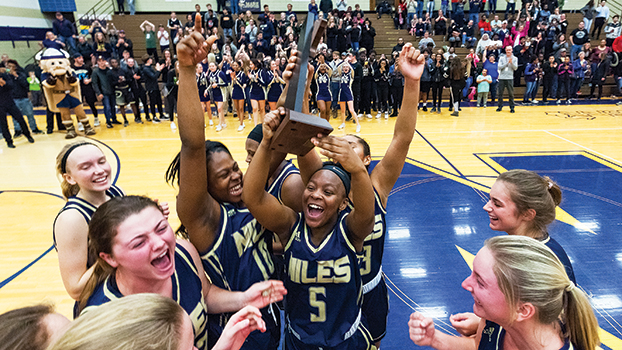 Patterson comes up big for Vikings once again

NILES — Sophomore point guard Alycia Patterson is never going to be the biggest player on the court, but if anyone plays with a bigger heart, Niles coach Jessica Johnson would like to see her.

Patterson helped deliver Niles its first district championship with another outstanding performance in the Vikings’ come-from-behind 48-45 victory over Berrien Springs in the Class B title game Friday night.

It was Niles’ first title of any kind since 2011 and its first Class B championship since 2005.

Patterson scored 26 points, hit three out of four free throws down the stretch and 11-of-13 on the night for Niles, which now travels to Hopkins on Tuesday to face Hamilton in the Class B regional semifinals at 7 p.m.

It capped off a big week for the sophomore, who hit the game-winning shot at the buzzer to lift Niles past rival Buchanan in the district opener and hit a key 3-pointer at the end of the third quarter to spark the Vikings comeback win over Coloma in the semifinals.

“I am very happy to have her on my team,” Johnson said. “I am very confident when she has the ball in her hands. She does what she does. She makes big shots. I told her when we had the time out to just go make your free throws. This is what you do.”

Patterson was at the line with the game tied at 45-45 and 10.6 seconds remaining.

She made the first, but missed the second one.

Niles’ Reese Davies grabbed the offensive rebound and was fouled by the Shamrocks.

Davies was unable to capitalize on the chance as she missed both free throw attempts, but teammate Aynslee Myer grabbed the missed ball and got the ball to Patterson, who was fouled with 1.7 seconds remaining.

Patterson made both free throws to give the Vikings a three-point advantage.

Berrien Springs’ Miracle Henry heaved a last-gasp shot, which bounded off the rim.

Johnson was equally pleased with Davies and Myers.

“I love Reese Davies grabbing the rebound,” she said. “Unfortunately, she missed her free throws and then Aynslee Myer got a huge rebound and got the ball back into Alycia’s hands.”

Patterson said that her team just keeps battling and as a result came up with three big wins and a championship.

“We just keep fighting,” she said. “This was our goal since the beginning of the season and this is what we wanted to win. We made sure we did not put our heads low.”

Patterson said that she does not necessarily want to be the one that has to take the big shot at the end of the game, but if that is what it takes to win, she is fine with that.

“It is kind of hard sometimes, but if I have got to do it then I got to do it,” she said.

Both teams looked a bit nervous at the start of the game and as a result, the Shamrocks and Vikings were deadlocked at 8-8 after one quarter.

Berrien Springs (9-14) was hot from beyond the 3-point line all night long and it allowed the Shamrocks to control the middle two quarters.

Berrien Springs led 23-17 at halftime and 35-30 heading into the fourth quarter.

Niles was able to go inside against the Shamrocks while Patterson drove to the lane and hit big outside shots.

Senior Avyion James came up big for the Vikings in the second half and especially in the fourth quarter.

James’ rebound and putback tied the game at 45-45. She ended the night with 14 points and seven rebounds off the bench.

“That was her best game,” Johnson said. “She played very, very hard. A lot of times I have to watch because she does have asthma really bad, but she gave it all today on the court.”

Berrien Springs hit nine 3-pointers on the night, including four by Dortch and three by Sanders.

The Shamrocks also outrebounded the Vikings 37-34.

Niles now begins preparation for Hamilton (22-1) in the regional semifinals.

“I am going to wait until tomorrow (Saturday) morning to calm down,” Johnson said. “We will have a small shoot around on Sunday and back to work on Monday.”

The winners advance to the regional championship game at 7 p.m. Thursday at Hopkins.